Why Had I Needed to Jump Off That Cliff? 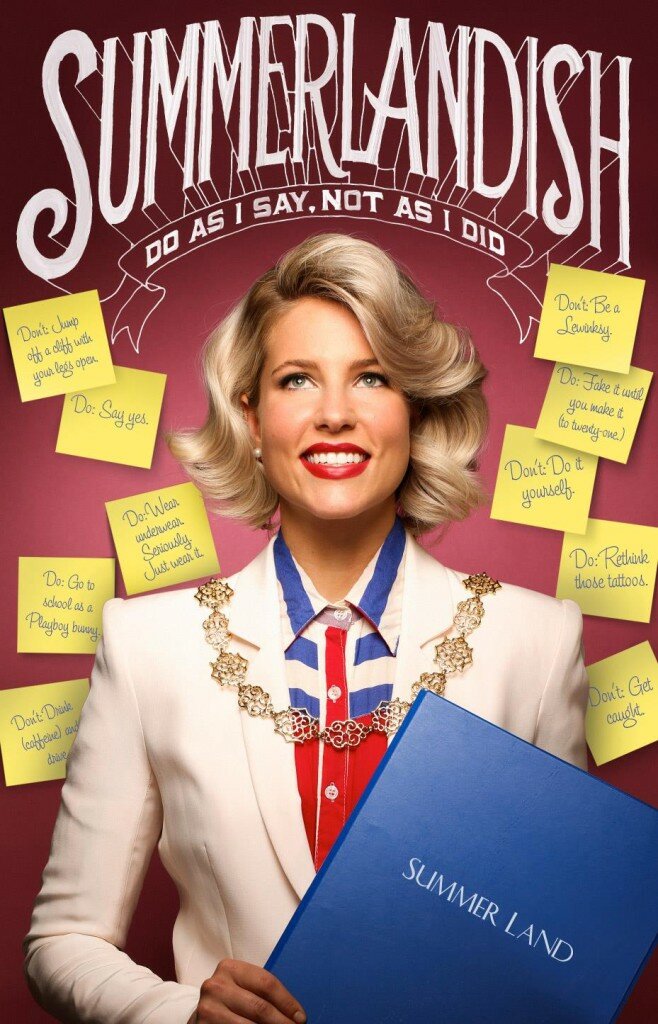 Excerpt from Summerlandish: Do As I Say, Not As I Did

It was a resplendent day in the outback when my friends and I set out to experience the famous Bell Gorge, known for its daunting cliffs and deadly challenges. To get there, we had to drive off-road for an hour, wade through unpleasantly croc-infested water and hike for miles. If you were brave enough to attempt ‘The Jump’, though, you had to climb even higher on the extremely rocky terrain that stretched over the gorge. The men in my group were anxious to race each other to the top and be the first to conquer the mammoth cliff.

The girls and I laid down our towels and waved goodbye as the guys set off in search of bigger thrills. (I don’t see what could be a bigger thrill than achieving the ultimate cinnamon glow, but whatever.) Before we knew it, the guys were at the top of the cliff, a little more than fifteen meters above us. Expecting the men to jump right away, we all had our cameras ready and waiting. And waiting. And waiting … What was the hold-up?

The boys were simply standing still at the top. It appeared that they were trying to figure out the best angle, and what trees and rocks they needed to clear. Naturally, I started getting antsy. Why didn’t they just jump? I was once too afraid to go on a massive water slide at Jekyll Island’s Summer Waves Water Park in Georgia, at age seven, and have regretted it ever since. From then on, I’ve always faced my fears.

Suddenly, I heard myself make some asinine comment about the guys being too scared, and proclaimed that I was going to make the jump myself. After checking to be sure that my pale-purple string bikini was double-knotted, I set off for the summit.

When I reached the peak, the sickening realization set in that we were a lot higher than it looked from down below. The girls looked like ants. But there was no turning back now. The next chain of events happened in less than thirty seconds: I quickly asked where to jump; Rob, a rough-around-the-edges English bloke, pointed to the left; I immediately proceeded to hurl my body over the edge, dropping fifteen meters.

It felt like I was plummeting for a solid two minutes. I even had time to make eye contact with a bird and contemplate how painful my imminent death would be. And then, travelling at the speed of light, I hit the water … with my legs open. The water rushed into my anus like it was trying to capsize the Titanic. My organs felt like they were drowning, and I couldn’t kick my legs.

I tried to yell for help, but had gotten the wind completely knocked out of me by the less-than-graceful landing. After dog paddling to shore, my friends managed to pull me out of the water and drag me onto dry land. Emily, my bestie from university, then helped me crawl behind a rock where, with my swimsuit pulled to the side, I immediately shat and peed out of my ass. It was like the enema from hell. The only thing that calmed me was the fact that Gwyneth Paltrow would probably endorse it as a kind of natural colonic.

Emily was laughing hysterically, because a group of perfectly sculpted Australian men noticed what was happening and were pointing at me. Feeling somewhat embarrassed, I did my best to tidy myself up with leaves and hide my pile of watery sewage with some dirt. Finally relieved, I stood up and limped to the rest of my friends. They informed me that the whole thing had been caught on video, which instantly made the entire experience (watery feces and all) totally worth it.

The guys, still up at the top, now had no choice but to do their jumps. It wasn’t only that some girl had just stolen their thunder; it was that some American girl had just stolen their thunder. For SHAME. So they finally took the leap. (Followers.) Afterward, we all gathered to talk about the thrill and the height, and to compare our war wounds. Rob’s tailbone was throbbing, and another guy’s foot was black and blue. It was obvious that we were all hurting, but I secretly felt like I had internal injuries (and I was pretty sure that approximately two feet of my intestines were hanging out of my butt).

I tried to giggle with my friends, but it felt like the shattered pieces of my tailbone were individually stabbing my already-damaged internal organs. A bit later, Rob came up and whispered to me, ‘Miss, have you got your period?’ At this point, being a thousand per cent confident that I was not on my period, I realized that blood was probably seeping out of my ass.

I remained outwardly calm, but in reality I was wondering where, exactly, the laceration was: on the inside, or the puckered part? Unfortunately, I was definitely not in a position to sit down with a hand mirror and survey the damage. Laughter about my butthole injury ensued from every person in our group. And not just your standard, ‘ha ha’, but actual German laughs followed by (in an extremely thick accent), ‘It was sofa king funnyyyy!’ And the English of course yelled, ‘You have a bloody asshole! Literally!’

We eventually made it to the car, where I quickly learned that I would not be able to sit for a very long time. Instead, I had to lie across the back seat and practice Lamaze breathing as the car made its way over the corrugated roads. (It felt much more like Mr Toad’s Wild Ride than it had on the way there.) Rob did his best to avoid potholes, but the corrugated roads made it impossible for me to unclench.

After what seemed like forever we stopped at a roadhouse where I immediately used a payphone to call my mom, Donna, in America and tell her about my self-inflicted injury. She scared the shit out of me (no pun intended) when she told me that, if there was poop in the wound, I could get a nasty infection.

Over the next several days I obsessively applied disinfectant to my injury and did my best not to wipe poop into it, and eventually my flesh wound was fully healed. However, my tailbone continued to turn every shade of purple for the next two weeks. (I feel like getting multiple enemas after eating curry for ten days straight, in Calcutta, would have been less detrimental to me.) Whenever I was in the shower, I checked with my hands to make sure my bowels were all still tucked up neatly inside. I had watched plenty of health shows and knew that I was in no mood for hemorrhoids.

The stress of trying to heal my injury started to weigh on me. When I looked at my friends’ lives back in America on Facebook, they looked so clean, so successful and so happy. I was living in a tent, trying to avoid piles, battling thrush, living off cans of tuna and really starting to miss my family. How had I gotten here? Why had I needed to jump off that cliff?

Summer Land is a blogger and author of Summerlandish: Do As I Say, Not As I Did. She is a contributor for FlamingoPink.com.au, Quarter Life Conversations and Ladybits on VICE. She currently lives with her husband, Paul, daughter, Daisy, and dog, Cooper, in Australia where she is hard at work on her next book (and her wine consumption.) For all things #summerlandish follow her on Facebook, Twitter, Instagram and summerlandish.com