The Worst Breakups are the Breakups that Never Happen 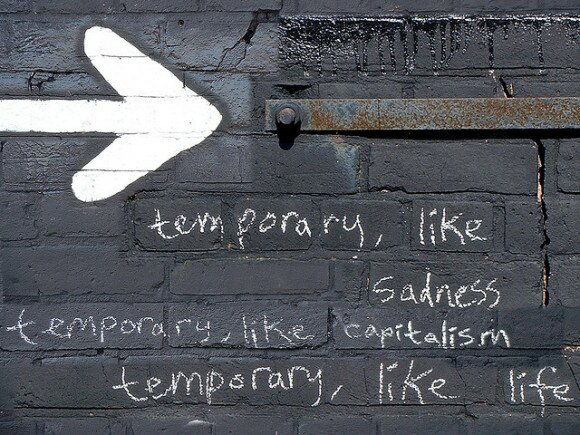 The worst thing about breakups is when they never happen. When you get dumped, when a guy or girl breaks up with you, then you can watch Almie’s video and take her sage advice, and you will suffer and grieve, but you will survive. But what about the non-breakup? The disappearance? The ghosting? The slow, inexorable self-removal of a person from your life, via unreturned text, via sudden, unexplained, constant busy-ness, via silence.

You think you want closure. Or you think it’s “just a phase” and that s/he really is that busy right now. Or you make a list of all the things you did wrong, all the signs you should have seen, all the ways in which you let yourself get too invested. Too vulnerable. Too needy. Too independent. Too Much Too Soon, or Too Little Too Late.  You blame, blame, blame, him, her, or yourself. You dwell and obsess and it all spirals down into anger, hurt and sense of helplessness or is it hopelessness? No. The sadistic thing about the non-breakup, the slow fade, the disappearance is that there remains a tantalizing sense of hope. You guys had something! It was real! Technically speaking…it hasn’t even ended! Maybe he/she really is just that busy right now!

And so it goes, but that is not the worst part.

The worst part is the legacy the non-breakup leaves. It is a legacy of unspoken hurt and eventual paranoia. Every new romantic connection you make becomes tinged with self-defense, with reluctance, with fear, with waiting for the non-breakup, the slow fade, the ghosting to start all over again. And, maybe, sometimes, you start ghosting first.

I don’t know what to do in these circumstances. I’ve sent emails demanding closure, or at least asking nicely for an explanation. I’ve done the breaking up first, or I’ve faded out faster. At times, I’ve let the ghosting happen, knowing it was happening, letting him go, feeling sad all the while. None of these strategies are good ones, but each mitigates certain effects of the legacy. You gain nominal closure. You maintain a sense of control. You detach and decide not to care in order to protect yourself. But what legacy does each of these tactics leave?

What kind of post-dating world are we living in? Am I suggesting we should be thankful for breakups? Hell yeah! At least you actually got dumped! You must be doing something right!

Maybe, in the end, the endings are all the same. Once upon a time you were with someone, and now you are not. Maybe it’s irrelevant whether there was a breakup or a slow fade or an abrupt disappearance. But part of me feels like it matters, really matters, how we treat each other. And if you avoid an awkward break up by slow-fading into oblivion, you are still doing damage to someone else. And maybe yourself.

thanks Dominic Alves for the photo.

For anyone who has been ghosted on, enjoy:

← The Bachelorette, S10, E1: Don’t Get Too Attached
Living Together →