Lying About Having A Boyfriend 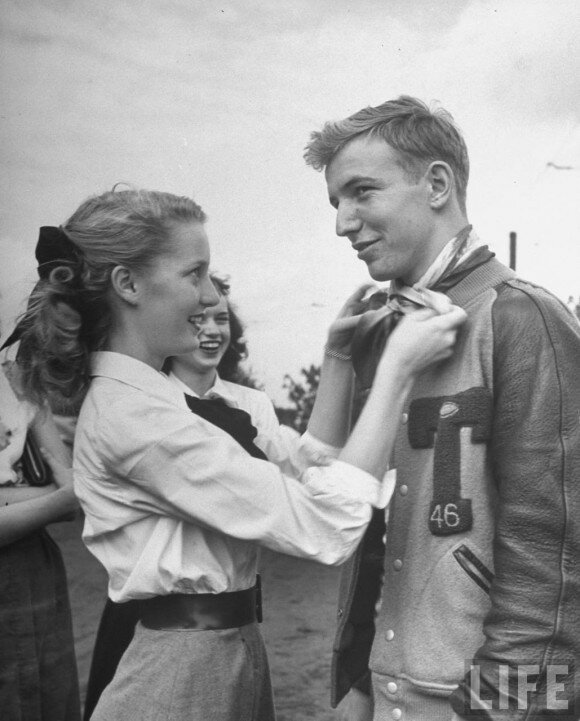 I was in Las Vegas in May, walking around with some of my dearest blogger friends, when we were approached by two men. One guy went right up to a friend of mine; the other went to me. This man stopped me and said, “Can I ask you three questions and you answer honestly?”

“Does this one count?” I deadpanned. He paused. He didn’t get it. So he asked again, “Can I ask you three questions and you answer honestly?”

“One. Do you have a boyfriend?”

Immediately he got right up into my face. “Two. Do you find me attractive?”

Without hesitation I said, “No.”

And then, because I’m too polite, I actually felt bad for the guy, and wanted to apologize, even though he was the one who invaded my personal space. I asked to see his ID for proof, as if that even mattered, as if it even mattered if he was lying about his stupid birthday. I think that was my way of apologizing, somehow. He showed it to me for about two seconds. “Look,” I said, “It’s not very attractive when a man gets in front of your face and demands to know if you think he’s attractive.”

“What would have happened if I said yes?”

My friend told me. I guess her guy was more attractive than mine. Turns out, if you say “yes”, the third question is, “What do I have to do to get you to kiss me?” Charming, right?

They eventually walked off, pretty soon after I made it clear that I wasn’t kissing anyone, and the whole event felt kinda weird and icky. “Why didn’t you just tell him you had a boyfriend?” people ask, when they hear this story.

But two days ago, I did.

There’s a liquor store down the block from me, so yeah, I pop in there pretty often. And not just for liquor. They sell Diet Coke by the can for seventy-five cents. That’s just good business. Because I’m nearby and because I’m in there a lot, the guys who work there have started to recognize my face. They’ve always been nice, helpful guys so it seemed like a bonus to be recognized as a frequent customer.

Once, one of the men working there — and the only one on shift at that time — completely threw me off when he asked me, “Do you live down the street?” I paused. “What?”

“Do you live a few houses down?” Now. I’ve gone over this before. I feel, like many other women, that I suffer from over-politeness/unnecessary apology syndrome. I’ve been breaking out of this (see the above Vegas story.) But once in a while, I don’t think fast enough, and out of fear of hurting someone’s feelings or causing someone to get angry and call me a bitch (not like that matters at all, which I realize, but is part of the whole syndrome), I answered this man with, “Oh, I live very, very far down, a few blocks down.” I didn’t need to do that. I didn’t need to say anything. But because I go there so often and because it seemed like he had an idea of where I lived, I chose to give a half-truth.

“I saw you go into a house right down this street.”

And that was the end of it. I remember thinking, damn, I wish I’d specified the gender of this imaginary friend. I wish I’d said, “he” and “his.”

I’m now going to get to the boyfriend thing.

Two days ago, that same guy was working there, but he wasn’t alone, there was one other guy working the counter with him. Everyone was friendly and nice and then one of them (the non creepy one) said, “That guy you’re always in here with, is he your boyfriend or your roommate?”

Immediately I decided that this was not when I wanted to tell the truth. I wanted to lie. Full-on lie.

“He is my boyfriend. I stay over there all the time, so I guess he’s my roommate too!”

Yup, I went for both. Boyfriend and roommate. The guy who asked laughed good-naturedly. But the creepy guy…that wasn’t good enough for him.

“I saw you go into a house two houses down from here,” the creepy guy said.

This really, really bothered me. He knew exactly where I lived, and the way he shared this information did not feel like a fun, conversational “howdy-ho neighborino!” Ned Flanders exchange. This felt weird and I didn’t like it.

“That’s where my boyfriend lives. I stay with him all the time. It’s my boyfriend’s place.”

The bastard wouldn’t let it go. “Your boyfriend?”

“Yes. We live close enough so I am with him all the time. It’s his place. His.” And that’s it, I was fucking done with the conversation.

Now, as for the guy they’re asking about. Not like it matters to the story, but we’re dating. We hang out a lot. Is he my boyfriend? No. Is he my roommate? No. Want to guess what I did as soon as I hurridly walked home?

I texted him, “From now on, whenever we are in [name of store here] you are my boyfriend, we live together, and you have a gun.” I told him the whole story.

So, because of some weird dude at a liquor store, I felt like I needed to make up a boyfriend. I don’t know if I can go in there again. And unfortunately, for the owner and for me, it’s a good liquor store. Very upscale, huge wine collection, up until now great employees, and they also sell those night-late essentials like toilet paper, and also Advil and coconut water AKA my hangover kit. But I feel like I can’t go back in there without my fake boyfriend. I feel like we have to go in there, arm in arm, talking very loudly about how much in love we are, how I’m moving in, and how he’s a very jealous man with a baseball bat in his car. I wish they sold condoms behind the counter so that we could go up there and I could say, “May I please have a box of condoms, for me and my boyfriend, who is standing right here, for us to use to have sex with? We have sex. Because we’re boyfriend and girlfriend. We’re going to go home to his house and have sex. My boyfriend is going to have sex with me after this. So we’d like to buy some condoms, please, shopkeep.”

I don’t even know if that would deter this creepy guy. I have no idea what he’s thinking. I’m not seriously concerned for my personal safety. I don’t think I am in danger. I think this guy thought I was pretty or whatever and doesn’t know how to talk to women and doesn’t realize that he’s fucking creepy. Or maybe I’m making excuses for him because of the syndrome.

Goddamnit I need a drink.

Reposted with permission from Apocalypstick.