Register | Login
Too Sexy for This Shirt

Is Fat A Feeling? 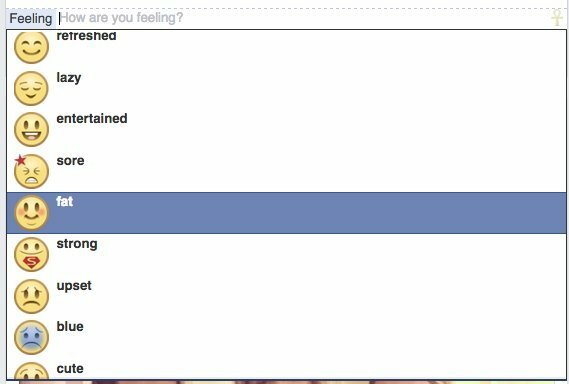 Have you ever “felt fat”? Have you ever said, “I feel so fat today”? Have you ever chosen your mood on Facebook as “fat”? Well, while you may be able to continue to have “fat feelings”, you can no longer promote those feelings on Facebook. A group of activists, led by Catherine Weingarten, petitioned on Change.Org to ask Facebook to remove the “fat” option under feelings. Why? The petition explains,

As someone who has struggled with and overcome disordered eating, I know what it’s like to “feel” fat. I have spent years of my life consumed with negative thoughts about my body, and far too many days starving myself in an effort to lose weight. But even worse than the skipped meals and the hours spent obsessing in front of the mirror was the fear of what others thought about me and my body.

When Facebook users set their status to “feeling fat,” they are making fun of people who consider themselves to be overweight, which can include many people with eating disorders. That is not ok.

We’ve heard from our community that listing ‘feeling fat’ as an option for status updates could reinforce negative body image, particularly for people struggling with eating disorders. So we’re going to remove “feeling fat” from the list of options. We’ll continue to listen to feedback as we think about ways to help people express themselves on Facebook.

It’s pretty refreshing that a major company actually listened to its consumers and made a change.

But what do you think? Is this good, real progress, or is it a case of caving in to hyper sensitivity?

Personally, I’ve had days where I “felt fat”, without ever bothering to stop and think about what that really meant. Was it offensive? I realize that I’m not fat in a traditional sense; though living in Los Angeles, I definitely have days where I feel like I’m too fat to live here. And that’s usually when I think, “Well, so what?” Because fat is not the worst thing a person can be. I’m reminded of this quote by J.K. Rowling:

I agree with her. And to me, fat isn’t a “bad” word. It’s a just a word. It’s a description. But I can also understand how some people would see it as an insult, and even a potentially dangerous word. I don’t think Facebook meant to hurt anyone when they listed fat as a feelings word, but I can agree that fat is not really a feeling. To me, it’s like saying “I feel freckled today.” It doesn’t insult people with freckles, it just makes no sense.

What do you think? Is fat a feeling? Do you agree with Facebook’s decision?

← Love and Cancer at 27 | Being Mortal | FRONTLINE
Unintentional Apologies →