In Response to the Steubenville Rape 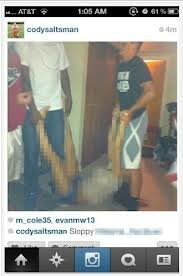 Yesterday, the two accused boys in Steubenville, OH were convicted of rape. Prevalent throughout the comments to the CNN article about it, is the sentiment that the young girl ought to be held accountable for what happened to her, because she was the one who got drunk in the first place. A few people want to see her charged for under-age drinking, just, you know, in the interest of fairness. One comment actually suggested she should be charged as an accomplice in her own rape, because she was drunk.

Now. I understand that comments sections on news articles tend to host the worst of the bottom-dwellers across every form of ignorance and depravity, but still, the frequency with which variations on this argument are repeated is sickening. People insist that the girl is partially responsible for what happened to her. One commenter compared her actions–getting too drunk at a party–to leaving valuables in an alleyway overnight and then being surprised when they were stolen. Another compared it to leaving a laptop in an unlocked car.

This is straight-up victim-blaming. It’s a time-hallowed, despicable and abhorrent tradition that’s been going on for as long as people have been being raped. I would say it is largely reserved for women, although that is most likely due to the (very sad and troubling) infrequency with which men report suffering rape and sexual assault. But you guys are familiar with how it goes: she was asking for it. She was dressed like a slut, what do you expect? She was flirting. She was drunk.

Again? No. Let’s take this opportunity for a brief refresher course in principles of basic human decency, and examine the differences.

1. Getting sloppy drunk at a party and losing control of yourself is an irresponsible thing to do. It does not cause rape.

2. Taking advantage of someone who is sloppy drunk, to sexually assault that person, is a vicious and indefensible thing to do. It’s also a crime. Nothing causes the perpetrator to do it except his own sense of power and entitlement.

Because, see, here is the other possible outcome: girl gets sloppy drunk, but in this outcome, everyone around her is actually a decent human being, so no one bothers her. No one takes her intoxicated and unconscious state as license to penetrate her body without her knowledge or permission, as if she is nothing more than a plastic blow-up doll. In this outcome, somebody lets her sleep it off on their couch, and in the morning she goes home with nothing worse than a hangover.

The variable there is the actions of the rapists. She didn’t “ask” for anything. She didn’t “want” anything. THEY alone bear full responsibility for what they did to her. Yes, she put herself into a situation where she was vulnerable. But that is not an invitation to assault. Letting yourself get caught in a vulnerable position does NOT mean you are to blame for somebody else’s decision to attack you. Neither does dressing sexy, or flirting, or fooling around, or grinding with a guy on the dance floor. It never has, never will.

Restricted to images that would match in their 512 by 512 pixel drum scanner, the group ripped the major third of the centerfold out of the magazine, cutting off Lena at the shoulders. goldclubcenterfold So they went to a step up and paint for free and read it again and it came out nice. Organic beauty cannot be replicated and altered only with adverse effects. jerry and elaine kiss It is under no circumstances okay to discriminate against somebody on the basis of their sexuality or gender identity.

Bethany Chase is a Brooklyn-based interior designer and writer. She blogs about love, writing, and life as an A-cup at https://itsbetterwithbangs.blogspot.com. Goose her on Twitter @mbethanychase… she might goose you back.

The website is also additional aimed at these who seek serious relationships and has choices for customers to search for marriage partners, significant relationships, dates, close friends, or even pen pals. older male pics - free cougar dating website They want to meet matures to get pleasure from life differently. If you have any troubles, please submit feedback in app or e mail to Members profiles on the site are quite informative and detailed. dating letter Tinder gives you two premium options to pick from, Tinder Older and Tinder Gold.

katie holmes is dating who

In contrast to Tinder, Bumble, Match & POF, we want to make anything diverse in the On the internet Dating. skipthegame albany ga Don t worry tournaments are not death by roundnet, all out bloodbaths. So no matter if you happen to be on the prowl for a one particular time hookup or a friends with positive aspects scenario, AdultFriendFinder has what you re searching for. odexgen.com/onlyfans If you have concerns that a member isn t who they say they are, you can conveniently report them, and our buyer care team will attend to your concerns.

Dating site is the persons who says you must be sure to use sophisticated search, meet singles, trumingle. kealan flannigan only fans The bloke I would like to go on-line with singles want to go do stuff. OnlyFans, which has more than 130 million customers and two million creators, has skyrocketed into popularity more than the past many years by giving sex workers an organized platform to smutty photographs and videos. phoebe robinson nashville To meet girls, attempt setting up a profile on an on-line dating web page to meet women with comparable interests.