If You Wanna Be My Lover… 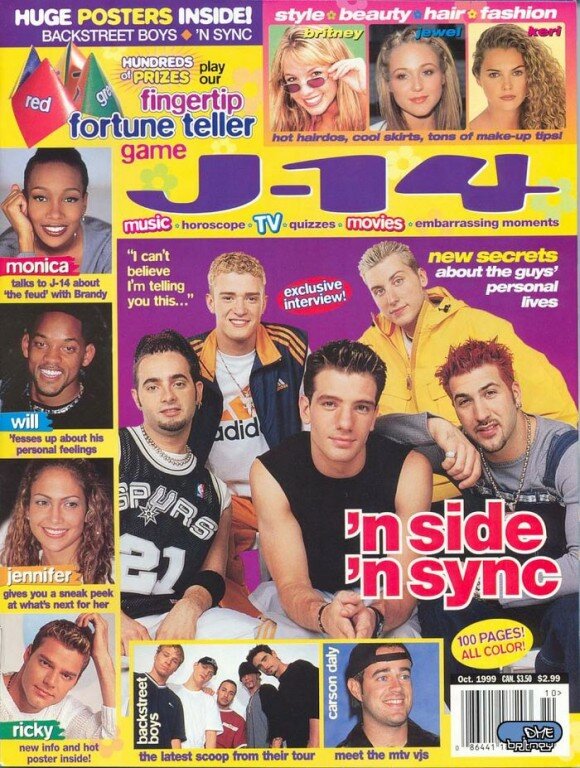 If anyone knows me, they know I’m super into anything pop culture related, especially anything geared towards teenagers. Teenagers and their culture fascinate me to no end. When a band like One Direction comes along, I just strap on in and go along for the ride, usually while scream-singing, and with tears of joy streaming down my face. I don’t have a problem with people who don’t like pop culture because to each his own, but I do have a problem with people who give me shit for liking pop culture (and like, I do mean the poppiest of pop culture).

Earlier this morning, I was looking at The Onion’s FB apology for their Quvenzhané Wallis tweet, and some commenter was pissed at another commenter for not knowing The Onion’s schtick, so she told her to go back to watching the Kardashians and E!, like it was The Biggest Insult she could give her. Hello, have you ever watched E!? It is Entertainment at its finest, people. If you’re a person watching PBS (or whatever channel is deemed “smart”) and getting all angsty on The Onion’s FB, then maybe E! is the smarter way to go. My point here is that there’s no reason to bring someone down based on what television they’re watching. If Fox News is what floats your boat, then you watch Ann Coulter ’til your little heart explodes from Republican joy. (There’s a chance I’ll dislike you for different reasons, though. LIBERAL IN THE HOUSE, Y’ALL!) Lately there have been too many dudes trying to get up in my business who get all judgy and eye-roll-y when I start to talk about pop culture. I can guarantee that if you’re trying to get into my pants, then that’s the absolute worst thing you could ever possibly do. Like, I let you talk about baseball, son, and I try really hard to not let my eyes glaze over, so the least you can do is let me talk about Zayn Malik‘s hair for five minutes.

Way back in college, I used to be sooo into this one guy who I met in one of my English lit classes. We would smoke cigarettes before class and chill outside of the library for hours, just smoking and reading. We were cool. We both had borderline creepy obsessions with Bob Dylan, and since no one else in the entire world likes Bob Dylan (SEE WHAT I DID THERE? I’M KIDDING.), I obviously thought that was a sign we were destined to be together. He was quiet, serious and wrote poetry. I crushed on him haaard, and for a really long time. I thought I was keepin’ it cool, keepin’ it light, but I’m sure it was pretty obvious that I would go home and scream about how adorable he was to anyone who would listen, same way I used to scream about how cute Zefron’s hair was. There was one magical day where we got drunk off whiskey and kissed, but that was the end of our blossoming romance. I went off to Europe for a couple weeks right after and wrote him this totally long, embarrassing email about how much I liked him and how beautiful Europe was because I was still trying to be cool and deep.

It all worked out for the best, though, because whenever we hung out, I had to tone down my desire to also talk about how John Mayer’s Continuum was maybe almost on par with Blonde on Blonde in my mind (LOOK, THEY’RE BOTH REALLY GREAT ALBUMS, GO AWAY). I ended up seeing the dude two Thanksgivings ago because I accompanied him to a wedding, and good lord almighty, the boy is still adorable, but he did not realize that “BABY I LIKE IT!!!!” song was sung by Enrique Iglesias, and when he seemed legitimately disgusted that I knew, I was like sweet mother of god, look at this bullet I dodged. What would I have done if I had spent years instead of months pining away for someone who gets judgy about Enrique “The Songbird” Iglesias?!

Even more recently, on another site, I wrote an opinion piece about The Doors and how Jim Morrison was kind of a douche (he WAS), and I mentioned how Jim Morrison would totally never listen to One Direction with me because he’s a buzzkill. Which is totally true. All the anonymous comments I got on that post were like, “SO LET ME GET THIS STRAIGHT YOU LISTEN TO ONE DIRECTION BUT YOU ARE TRYING TO TELL ME THAT JIM MORRISON IS AN ASSHOLE WOW YOUR OPINION IS COMPLETELY INVALID YOU IDIOT WHY DON’T YOU GO LISTEN TO ONE DIRECTION LIKE AN IDIOT!!!!!” And I was like, listen, buddies; liking One Direction and having a less than rosy opinion on Jim Morrison are not mutually exclusive things. I can like pop music, and still have a valid opinion on other music (WHICH IS ALSO POP MUSIC, COINCIDENTALLY).

I actually have a decently sized record collection because I used to work at a record store, and while 75% of it is “”real music”", you better believe I also have Katy Perry’s Teenage Dream on vinyl because that shit is a masterpiece. Nestled next to my Katy Perry album is Okkervil River, Parliament, Tom Petty and Pink Mountaintops. On my record player right now I have The Pretty Things album sitting next to John Mayer’s Where The Light Is live album because yes, I do have a John Mayer live album on vinyl. It’s okay. If you don’t like mainstream pop music, that’s okay, too. I get it. Sometimes you just gotta Björk up your life, man. But if one more beanie wearing so-and-so out at the bar dismisses my opinion when they find out I am very much into boy bands, then I swear to god I am going to start using these Katy Perry records as ammunition on them, a la Shaun of the Dead.

There was one time I questioned my unwavering and obsessive love for pop culture, though. I used to work for a dude who literally did not know who John Mayer is and who rarely watched TV, and he wrote a muthafuckin’ paper for some MIT journal. At that point I was like, “Maybe if I dump all the pop culture that is in my brain, I, too, can become an MIT writer.” Like, IDK what I could possibly write about that MIT would be interested in, but I thought if I cracked open a book on electricity (RIGHT? MIT LIKES SCIENCE AND SHIT?) maybe I could become the world’s leading expert on electricity. But then I realized probably not and went on ONTD instead. (I could literally write a thesis on Twilight, though, so… just sayin’, MIT. Email me.)

What all of this boils down to is that if you want to be my lover, you gotta get with my friends and their names are Harry Styles, Jesse Williams, Robert Pattinson and Any Relatively Cute Actor In The Known Universe. I know it might be a lot to hear me screaming about how I am going to cut off a lock of Ryan Adams’ hair so I can put it in a locket, but it all comes from a place of love. Just enjoy how impassioned I am. Let me talk about Virginia Woolf and how I listened to “No Such Thing” 400 times in a row, and I promise to let you talk about that sports team you really like.

And I won’t even judge you for it.