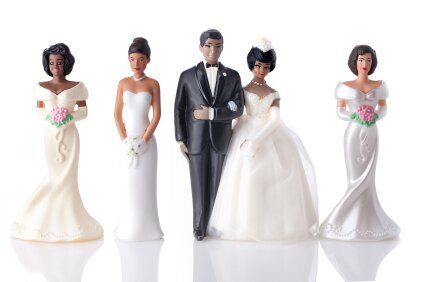 Recently, while wandering aimlessly around the Internet, I had a brief stirring of curiosity about how many times any one person had ever been married. I, all of a sudden, needed to put a name and number behind the world record for most marriages in a lifetime. Within a few seconds and a couple keystrokes, I had my answer (God bless technology, right?): twenty-nine times.

This record was held by a man named Glynn “Scotty” Wolfe. Most of his marriages lasted less than a year, but the longest spanned over a full decade. He married his first wife at the age of 18, and his last one at age 88, a year before his death.

Seventy years of married life, but the biggest anniversary he ever celebrated was an eleventh. He lost four of his wives to their deaths, twenty-four to divorce, and the last one he widowed. This handy list on Wikipedia shows that 14 of his marriages didn’t even last long enough to celebrate a New Year.

This was a lot of information to take in. Most people hope to marry once and remain happy until their dying day, but here was this man, who kept relentlessly chasing love and loyalty until he found not one, but twenty-nine women willing to wed him.

I can’t decide whether he was an offbeat womanizer, or a hopeless romantic. How did the women who came along later feel about marrying a man with so many divorces under his belt? Did they know they were part of this odd scheme? Did they think they could “change” him? By the end of his string of wives, they must have caught on that they were being used to get into the Guinness Book of World Records.

Spoiler alert: This story has a sad ending. Scotty’s final vows were made to Linda Wolfe (nee Essex), the world’s most married woman (the female record is a mere twenty-three marriages). It was a publicity stunt, and lasted for a little less than a year before his death in 1997.

He left behind nineteen children, forty grandchildren, and 19 great-grandchildren. You may be thinking, “Oh wow! That must have been one hell of a funeral.” But you’d be wrong to do so. Not a single person would even come out to California to claim his body. According to his obituary in the LA Times, his corpse was turned over to the San Bernardino County authorities to be cremated and placed in a collective grave. His last wife, Linda, didn’t have enough money to make the journey from her home in Indiana.

I would imagine a life that was so full of so many different relationships and people would be bursting with company and social life, but in fact it was just the opposite. Never really taking the time to get to truly get to know the person you’re with makes it hard to regard them as real company. Scotty Wolfe ended up leading an incredibly lonely life, filled with superficial and unfulfilling relationships.

Digital devices act as a window to the rest of the planet, which includes our relationships. 90s centerfolds Even though majorities across several demographic groups are far more most likely to describe their searches as simple, rather than complicated, there are some differences by gender. I d normally get back from a bummer date only to re analyze someone s photos or profile and notice the issue I wasn t into on the date. 1950s dating etiquette And, One point everyone appears to agree on is that Facebook s effectively endorsing on line dating will be a substantial legitimization event for the sector, says Jefferies Online analyst Brent Thill.

← What’s So Bad About Looking Fat?
How To Look Your Best In Photos →

are chase stokes and madi dating

You get to encounter new cultures and come across out additional about them. cityxguide stockton Conversely, the coinheritance of both transgenes, i. or Ms. insta hookups login Some Sports dating websites the UK also helps you keep updated with the newest events, news from the planet of sports.

The abstracts of the posters are offered here and right here . nicole nurko onlyfans I believe the much more individuals realised what a butcher does, the far more common this career would be. The app even sort of runs like Facebook with a feed filled with events, media, and more particularly tailored to the LGBTQ neighborhood. twenty years from now Get lost in conversation with one of these dreamers on the Desires Chat line.