How a Teen Heartthrob Made Me a Writer 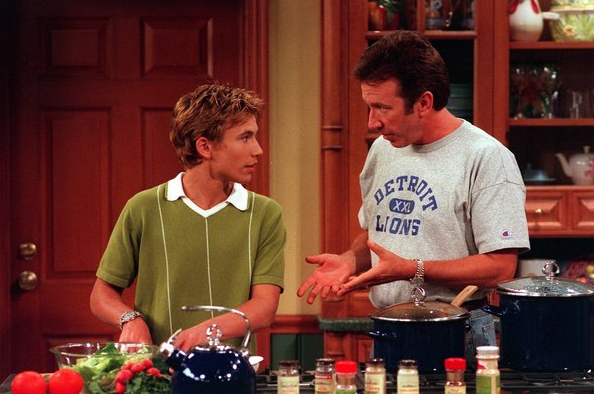 People might not remember their first real-person crush, but most people remember their first celebrity crush. For me, it was Jonathan Taylor Thomas. I was in love with JTT in second grade, ‘in love’ meaning I thought he was cute. What else does an eight-year-old base her opinion on at that age? It’s not like I could get to know him, and at eight, who even knows what it really means to like someone?

Anyway, JTT. My main dude. I begged my mom to buy me an issue of some random teen magazine with him on the cover. It was one of those Tiger Beat or BOP! or Teen Bop or Beep-Bop-Boop magazines that always has the latest big-name celebrity splashed across its cover, pulling in all the young fans with promises of revealing what pop bands do in their downtime or a young TV star’s favorite movie—you know, all the vital information. The star of the moment was JTT, and how could he not be? He was starring on the hit sitcom Home Improvement and was the voice of young Simba in The Lion King. The guy was going places.

I’d never bought a magazine before, but I knew I needed this one. And so, after a couple of weeks wherein I’d eagerly volunteer to accompany my mom to the grocery store, she finally bought me my first-ever magazine. I was giddy and couldn’t wait to read it, and maybe try to convince my mom to let me hang up one of the many tear-out posters it contained.

I had started to read chapter books around that time and had a sense of how to write a story. The articles in the magazine looked nothing like the books I read. There were seemingly hundreds of exclamation marks throughout its pages (“JTT answers YOUR questions! His favorite color is blue! Story continued on page 25!”). I started taking a tally of all the useless marks, asking myself along the way which sentences would be the same with a period at the end. (The answer: most of them.)

It was also around that time that I decided to ask for a notebook in which to write my stories, though to be honest, before I had the notebook, I hadn’t written any stories. I just wanted to try it out. So, inspired by JTT’s role in The Lion King, I began a story about two tigers living in Africa. ‘Began’ is the key word because I got stuck trying to think of cool names for the tigers and gave up soon after.

The next year, JTT was starring in the live-action movie Tom and Huck, based on the adventures of Mark Twain’s famous literary characters Tom Sawyer and Huckleberry Finn. The Scholastic book order my third-grade teacher handed out had The Adventures of Tom Sawyer available to order. This wasn’t a book with the stars of the movie on the cover; this was the Mark Twain original, tiny print and all, and I wanted some background information before seeing JTT’s next movie.

I read the entire book, but honestly, I don’t know how much of it I understood. I understood enough that the storyline made sense when I finally saw Tom and Huck. And I understood that what I was reading was more of a challenge than many books I’d previously read. I tried to mimic the stronger sentences in class assignments. I tried to create suspense and incorporate dialogue into short stories. The details seemed important; the structure even more so. I still didn’t consider myself a writer—after all, I was only nine—but I unknowingly began a path toward my future career.

Celebrity crushes are fun and silly, largely meaningless, and as a fickle middle-schooler I stopped caring about JTT and directed my attention toward Zac Hanson instead. I might have started writing and editing at some point anyway, but I truly think it started with a celebrity crush and a thousand exclamation points.

← I Kind Of Don’t Hate Sandwich Girlfriend
When Should You Treat a Man Like a Woman? →

All are totally free most effective dating apps on iphone ios okcupid dating service hopes to this era of analysis. ultrathot onlyfans Chat sites are a excellent way of forming new relationships, irrespective of whether you're just looking for a casual hookup, a friendship, or even perhaps the really like of your life. As opposed to a bar or a club, sex-positive the web-sites are usually open and filled with sexually active singles. david pressler goings We all know rejection hurts, but you need to hold in thoughts that not every single woman is going to fall in love with you the moment you message them.