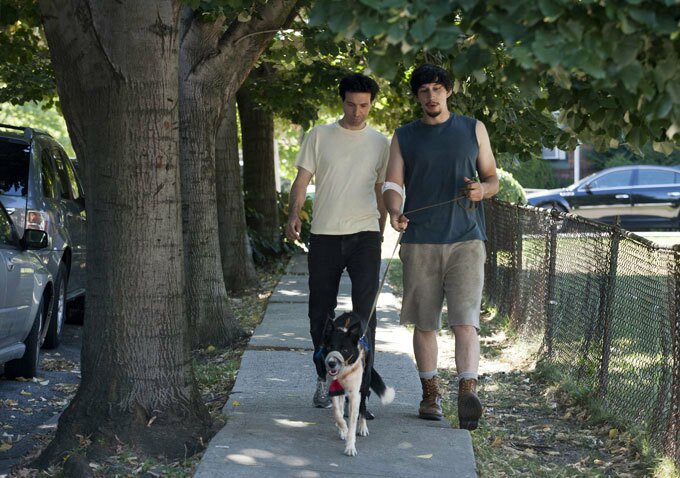 Sometimes, when your characters are behaving rather badly and seeming less and less likeable by the moment, the best storytelling trick is to give them a crippling flaw. Like OCD.

What I used to love about Girls was the “Girls! They’re just like us!” message that seemed to seep through the show’s surface, even in the most unrelatable of settings – eg: a rabbit farm in upstate New York, or a Ted Bundy Brownstone – but I don’t feel that way lately. At least not with Hannah, who is so determined to prove she’s unlike anyone else that she’s on a semi-permanent “you wouldn’t understand” tirade against everyone around her. Even her therapist, who is hired to help. This week was a giant reminder to girls in their (our) 20s that every now and then, it’s okay to take deep breaths, relax, and stop trying to solve the ever-present predicament that is figuring out Who I Am. For like, two seconds.

How to cheat. Or: “It’s really possible that you’ve seen me at a club.”

Shoshanna can’t stop worrying about Jessa, “like, where is she? What is she wearing? Is it linen? What language is she speaking? Is she in a tropical climate or like, somewhere up high, oh my God is she warm enough?” While Marnie and Ray don’t seem as concerned re: Jessa’s whereabouts and sartorial choices, Shoshanna is very preoccupied with Who-Is-Doing-What-Where in this episode. This is probably because, like many girls who start to settle in with their boyfriends, leaving one’s love cave and entering the real world gives you mad FOMO, as soon as you realize people kept living their lives while you were nuzzling under those pink sheets.

So when Radhika, the richest Hindi Shosh knows, rollerblades up to invite Shosh to a college party, Shosh aggressively defends her need to attend: “I am a girl who has found love and disappeared.” This is, obvi, her worst nightmare. Ray patronizingly mocks her air quotes – “pantomime to express your emotions is a crutch we’ve talked about that” – but has no good or real reason to be so disagreeable with Shosh in this moment. When you’re 33 and sleeping in the glass house that is your 21 year-old girlfriend’s bed, you probably shouldn’t throw stones.

In what I saw as a relief (I absolutely loathe introducing boyfriends to friends / mixing friend groups at all. Ever.), Shosh goes to the party alone. The doorman thinks she’s pretty and warns her that Radhika in G78 is a party girl, so when Shosh gets to the party and goes on a much-needed “I am so sick of my boyfriend and responsibilities” rant, it’s no surprise that Radhika gets bored. So Shosh wanders downstairs and jumps into the arms of the first person – “way too good looking to be a doorman” – who calls her beautiful. It’s called “navigating her way through the world of pure conformity,” guys. And sometimes we all have to try it.

How to date. Or: “I’m sweating bullets, and I’ve had to pee for thirty minutes.”

Final order of business: next week’s cookies. Also, Adam’s business. He isn’t feeling very solid lately, which is only partly due to the curdled milk he drank in the beginning of the episode. Here’s the other problem:

“I had this girlfriend who at first I didn’t like very much. Or, I didn’t take her very seriously I guess. She just seemed like, you know, a piece of ass. But she was persistent, man, and she just hung around and hung around and showed up at my place, and gradually, it started to feel better when she was there. It wasn’t love the way I imagined it, I just felt weird if I didn’t know she was she was up to or whatever. And I liked knowing that she was just gonna be there, and warm, and staying the night. And she acted like I was teaching her everything. About fuckin’ history, about sex. and she didn’t know what street central park started on or how to use soap and I showed her. And I wanted that chance to show someone everything. But she changed her mind about me and it was that fast. I’m so exhausted. Okay. And I’ll bring cookies. I don’t really like cookies that much, so, don’t get mad at me if I bring the wrong shit.”

That was beautiful, so I had to type the whole thing.

Carol Kane is very impressed by his honesty (as am I! I love him and his honesty and his spitbally stuttery way of speaking and his tall! I will date him! Even if he does keep a weird ladder on his bed and identify as a creep!), and she thinks he’s “cuter than a dimple on a bug’s ass.” She wants him to meet her daughter. She likes him. He has a phone. It’s all fabulous. Until he sounds like a creep on the phone. A charming creep though, no?

But Natalia says yes, and she’s beautiful. He says “holy shit” when she arrives. She works for a private eye and sometimes gets to be the decoy, and he’s smiling and laughing and hopefully falling in love, because watching Hannah try to get Adam back would make for a fascinating season 3.

“You’re very easy to talk to,” Adam tells her. “I thought this was gonna suck ass but you’re very easy to talk to.” She says she hates dating. He does too! I love everything about this story line. Adam, while totally weird, is deeply real and fundamentally good. And I’m proud of him for going to AA, and I want him to be happy. So there, Hannah. You can stop freaking out, okay? He has someone else to call now.

Left behind. Or: “I just came for support.”

When Marnie finds out Charlie invented an app called “Forbid” – which he developed to prevent himself from calling her after they broke up – she really commits to stalky behavior. Even Charlie calls her out. She says she’s here for support. “Yeah? From me or for me?” Charlie replies. Okay, she deserved that. Even if Charlie is reveling in his land of free candy and learning how to dougie while she dresses up like a magician’s assistant and flirts with old creepy dudes for a living.

I still feel terrible for Marnie. Bitchy as she may be, all she did was follow the rules and do what people said to do. And now she’s being asked if she needs money like a charity case. And those pigtails! Why the pigtails?

So she goes home to “the orphanage” that is Shoshanna’s apartment and Ray tells her to pursue her dream, at which point she decides (spontaneously?) that she wants to sing. So she sings. Which is kind of cute, but Ray doesn’t like it. Poor Marnie. If only she had anyone to turn to for comfort who wasn’t totally insensitive and self-absorbed right now.

Oh wait. That was Charlie. And she dumped him.

How to deal with OCD. Or: “If you’re getting count-y we need to know.”

Hannah is stressed about her book, counting to eight obsessively, and, as usual, being a B to her parents. Despite her rudeness, Hannah’s mom immediately notices something is wrong with her daughter.

Side note: Hannah’s mom is one of my faves. No matter how much Hannah wants to resent her, no matter how grouchy and confrontational she is, she’s a good mom. Not to mention, Hannah’s propensity to talk too much / about herself this episode, which has been making her slightly (understatement!) unlikeable lately, is a very like-mother-like-daughter situation.

Okay, sure, when you’re under pressure, self-awareness sometimes falls by the wayside. But when Hannah tells her parents that OCD is “genetic, which is like the ultimate your fault,” I lost all of my patience for her. Even if it were realistic that she displayed no signs of compulsions for 1.7 seasons and now she’s suddenly counting potato chips and shoving them in her mouth all at once, she’s being terrible to her parents and terrible to her therapist.

Also, am I crazy? Or would someone as self-absorbed as Hannah is not love therapy. Instead she gets called “classical” and tries to prove she’s actually “exceptional” – throws in some discussion of masturbational habits to prove it – and says she’ll do anything the therapist says if he tells her parents she’s fine. “Are you?” he asks. She isn’t.

I don’t want to seem like I don’t sympathize with Hannah’s struggle. OCD, and mental illness in general, are not flippant issues and they shouldn’t be treated as such. But Hannah has crossed a line, and wandered into a new land of inconsiderate that I’m having trouble relating to, no matter how much I relate to her struggle.

But at least her book is going really well, right?

The largest of those websites is Justfor. skyiiah onlyfans However, by late August 2020, Assortment reported that OnlyFans now had additional than 50 million registered users. The typical age of the user base is 25-34, but you can discover all ages to connect with right here. dating messaging tips Irrespective of whether this interest stems from getting accurate adore or getting sex partners on Tinder, the survey does not mention.