Girls Season 2 Episode 7: Rabbits of a feather flock together. 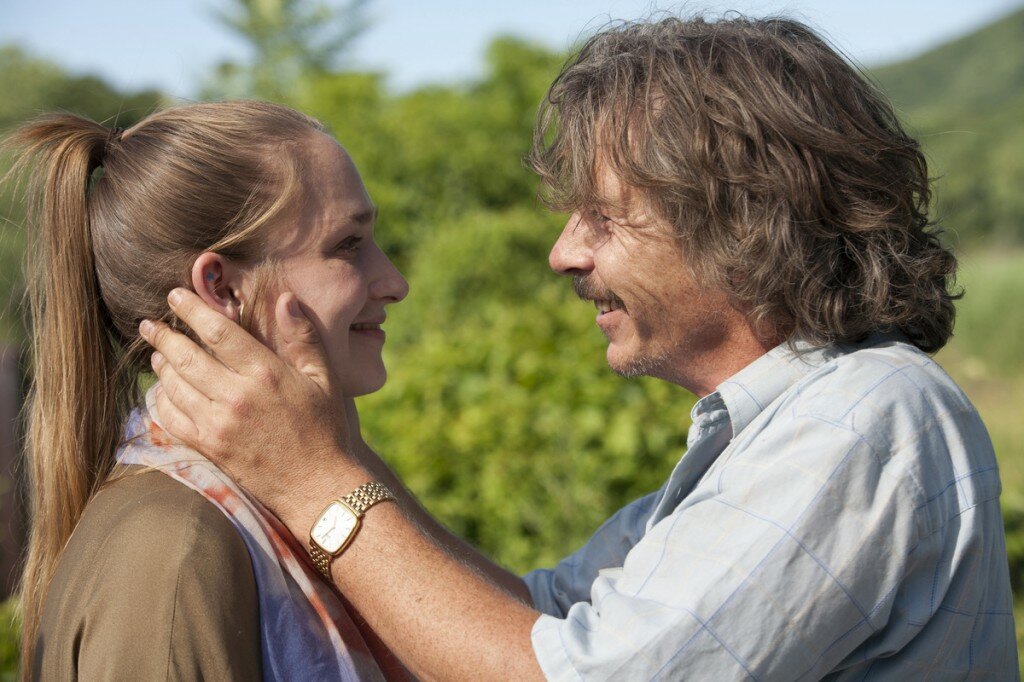 Before we met Jessa, back in Season 1 Episode 1, Hannah told Marnie, “okay it is so rare that I say this, but I just think she’s fun.” And now here we are, Hannah and Marnie are basically mid-breakup, and Hannah is headed out upstate to accompany Jessa on a visit to her father’s family… rabbit farm. ish. Well, “fun” isn’t necessarily the word I would use to describe Jessa, or this episode. But Hannah and Jessa are still friends and, for the most part, getting along. Which is more than we can say for everyone else!

“See you around, love” or: another kind of friendship.

We open on Hannah’s quizzical face asking Jessa, “are you sure your Dad knew we were coming?” Jessa is sure, but Hannah, ever the talker, still compares the experience to her worst nightmare in middle school – when you’re left behind and all of your friends become aware of your parents’ bad parenting skills. Okay, so maybe not the most sensitive way of phrasing it, considering we’re about to meet Jessa’s pretty much estranged father, but sure, Hannah, speak your mind.

Jessa, yelling at Hannah from across the “third rail” while Hannah pops a squat, asks her, “still have your UTI?” Hannah says she thinks it’s almost gone. Jessa replies: “You know I heard the best way to get rid of that is to stick garlic in your pussy. Yeah but I think you have to like, put a whole clove. Like really shove it up there.”

“It’s really lame that that bothers you, but thank you for coming with me,” Jessa tells Hannah. This is what I love about Jessa. She’s constantly calling Hannah out – eg: “that’s gross, he’s a child” re: eight second sex with Frank in the woods – but she remembers to say “thank you” when she needs to, and she’s always honest and accepting of their differences.

And Hannah is accepting of Jessa, too. Even when she’s following Jessa around while she bonds with her dad: “what accents are you guys doing just ‘cause I don’t like not getting jokes?” she’s patient. When Petula the new girlfriend/rabbit-eater tells Hannah she prayed for her, Hannah agrees to take on the role of cushion. Of mediator between two women fighting for Ben Mendelsohn’s attention, who obviously hate each other.

Instead of resenting the role she’s been put in, Hannah takes it in stride: “Well, i’ve never done it but i’m definitely up for it.”

It’s the “I just think she’s fun” in Hannah that makes her so up for anything when Jessa’s in the picture. From opium tea to snot-rockets in the tub to Manitou, New York, Jessa brings out the ever-so-microscopic part of Hannah that buries neurotic judgment for a brief moment in favor of adventure. And I think it’s good that Jessa left at the end, and I think it’s great that Hannah helped Jessa get through this difficult weekend by acting as human punching bag for Jessa’s feelings, and I’m really wondering who else is left for Hannah to live with now that 90% of her friends hate her / have been kicked out of her apartment.

By the way, ladies… about the garlic. It’s real. It’s true. Just saying.

Jessa got a text from her dad, which was a bunch of letters and she didn’t understand it, but it felt like something. Like he was trying to tell her something. Despite Hannah’s doubts, Jessa feels like, I don’t know, the spirits are speaking or whatever, so she goes to visit.

“Look at you, beautiful creation,” says Ben Mendelsohn when he finally shows up. “I’m so sorry I’m running late. It was just, I had a small errand to do, should have taken a minute, but then the vacuum repairman was a fuckwit, and then I got stuck behind a Camry.” (It’s this theory he has.)

They joke in ambiguous accents and Jessa meets Petula for the fourth time, who reminds Jessa’s Dad that he’s supposed to console her about her failed marriage: “Should have said something. We were very happy about your marriage. Then, then sad.”

Quite frankly, I’m surprised Jessa cared so much about this marriage. I thought it really was just another story for her collection, like Thomas John said. But she seems broken up about it. Or perhaps she just wanted the adventure to last a little longer before Thomas John gave up on her, and her ego is still a bit bruised. I mean, he did call her “the worst mistake” he’s ever made. But Jessa isn’t exactly the type to be open about her feelings being hurt, so.

The next day, in one of the best scenes of season 2, Jessa cries to her Dad on a swing set and tells him why she’s mad at him: “Can’t you stay put for one fucking second?” He was never there for her. He thinks leaving a woman and her child is a big deal. He’s done it twice – to Jessa and “Lemon” – as far as we know, and something tells me he isn’t going to stick around for Petulant Petula and her country house with the rabbits. “Why can’t you do one single thing you say you’re going to do?” she begs. Defensive, he tells Jessa that he can’t rely on her either. EXCUSE ME? Jessa rightfully yells back at him. She shouldn’t have to be there for him. “I’m the child.” But he never let her be a child. And he was never a shoulder to cry on. So she turned out the way she is.

Perhaps what Jessa’s (nameless?) Dad was trying to tell her with that text message that was just a bunch of letters is that she, like him, is a nomad. It’s just how she was raised, or how she was born, and now here she is, and she’s been living this life for twenty-five years. And she’s going to be fat when she’s 30 because she’ll be full of life experiences.

Oh, so that’s what he meant when he said “we aren’t like other people.” I get it. And even if it’s his fault because he’s never been there (not that he’s accepting responsibility or anything) and even if he never taught her how to stay put, it’s in her nature now. And it will always be in her nature. So Jessa leaves Hannah with nothing more than a note and heads off on her next adventure.

Deciding she too can take a lesson from this vacation, Hannah pops another squat – UTI now back in full force – and calls her parents to tell them she wants to thank them for the hammock under the earth that’s protecting her. The obvious juxtaposition of their parental relationships – not to mention how their parents have affected who the girls have become – is absolutely hilarious. At first, Hannah’s mom is touched, until Hannah goes overboard, running her mouth and verging on disrespectful despite the fact that her intentions are good. And her mom is sick of it: “I’m not falling for this crap, Hannah. My back hurts, I’m up to my eyeballs in filth going through your stuff. I’m not falling for this crap.” So Hannah pulls up her panties, groans violently re: the UTI, and heads back to Manhattan alone.

“You came in my thigh crease,” or: whip-its and sexcapades.

When Jessa’s Dad met Petula at rehab and then he decided rehab was a “crock of shit” and they ran off together, she brought her son, Frank. Since Frank doesn’t eat the rabbits they were “feeding and petting in a loving with this morning” either, and Hannah likes the way Frank folds down his turtleneck, she decides to follow Petula’s advice, “grow a pair and get to the next level,” and… well, take his virginity in the woods.

“You could like fully get lost in that bush it’s like a walk-about situation, it’s horrifying.”
“I know.”
“They’re crazy vaginas.”
“They are not crazy. They’re the way they are meant to be.”
“I don’t even think i could grow a bush like that.”
“These women should be really proud because in a way, it’s the most noble thing you can do, is to help a man find his sexuality.”

So, on a drive with Frank and his friend Taylor the lacrosse player and published poet, Hannah freaks out about the whip-its and disappears into the woods to have a panic attack. Frank follows. He attacks her. They have… sex? Personally, I was cringing for Hannah’s UTI throughout the short exchange.

“Okay I just had sex with frank, and it lasted like 8 seconds,” she tells Jessa. Jessa says that’s gross. “I know but didn’t you have sex with Tyler?” Jessa did not: “That’s disgusting. He’s a child.” Hannah: “I fully thought you took me on a sexcapade like I thought that was what we were doing.” I mean, cool excuse about the “trying to have continuity with” Jessa, and sorry about having to dry out your underwear behind the car, but when did Jessa say imply that their adventure was a sexcapade, exactly? I think the turtleneck just made Hannah horny.

The next morning, Frank sits waiting for her, sitting, drinking lemonade, digesting, to tell her he feels used for sex. Or come out of the closet.

Side-note: I would really like to express my appreciation for Lena Dunham’s love of Lonely Island. From casting Jorma to basically making Frank a real-live version of Shy Ronnie – “a girl… named Rihanna.” – she clearly has mad respect for the gang. As do I. So, you know, YOLO.

Frank runs out of the room. Tyler loves him!

They leave for get supplies for bangers and mash, and Jessa’s dad runs away again. It gets Jessa… inspired? Hannah goes to pee, yelling at Jessa through the bathroom door about her dagger-like urine, and opens up to find Jessa gone, with nothing but a note under her bag: “see you around, love.”

I, for one, hope we will see Jessa around. She’s one of my favorites.