Girls Season 2 Episode 4 Recap: It’s A Shame About Your Unicorn 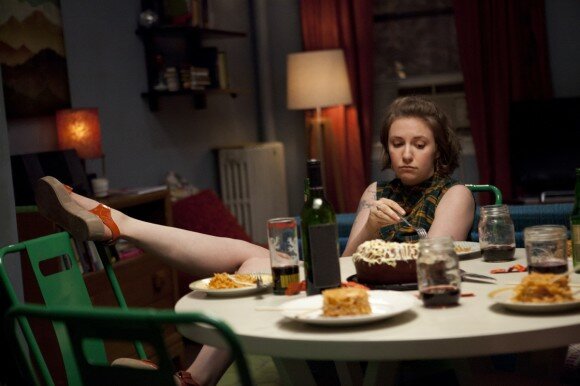 In this week’s episode, we watched Hannah continue to be an unfair beezy wreaking havoc on all of her friendships with reckless abandon, and also caught up with some recently neglected, sorely missed, more likeable characters! Perhaps it’s because she’s contracted an unfortunate case of never-stop-talking disorder, but Hannah’s kind of the worst lately, no?

Thank goodness for the rest of the Girls, or I might actually get frustrated enough to stop watching. Haha. Ha.

Elijah has moved out, and I am as furious as he is. His and Hannah’s coke-fueled Feeling Feelings party last week led to not a dialogue, but rather, a monologue, in which Hannah kicked him out of their apartment. Because roommate relationships must, of course, be perfect or not exist. Although at this rate, Hannah’s running out of options. Maybe Adam should move in after all?

At least the writers continue to feed us these lovely little dinner parties. Group scenes are where Hannah is at her most shameless, where Marnie Queen of Comebacks rules over Williamsburg, and where the Girls writers excel.

Since, in Hannah’s world, passive aggression reigns and nothing should be taken at face value, it makes complete sense that Marnie was not only invited to dinner, but also out of line for showing up. And it makes total sense that, despite her attempt to be diplomatic (albeit, a bit dramatic) by offering to leave, Marnie should have to stay and listen to Hannah berate her sexual spirit. Then get called a Stepford Psycho by Mustardseed Sally the headband wearing hipster.

Marnie takes it like a champion though. She sits up straight for the entirety of dinner, and gracefully excuses her way around Ray’s accusations that she’s pining for Charlie’s butt hole. But Audrey’s playing an aggressive game of Defend Your New Man, and pulls the “basically you want to kill yourself” card on Marnie. No, Hannah insists, Marnie is way too self-involved to commit suicide. However, since we have punished her sufficiently for so recently double crossing Hannah, she is now free to go.

Unexpected twist: Charlie follows Marnie! Up to the roof! Where he praises her cleanliness and leans in for a conciliatory “I miss you sometimes” make out sesh. Which Marnie accepts, for a little while. (Long enough to stroke her ego, which has been withering away along with the few ounces of fat she once carried on her body.) Then she drops the “Hey. I’m seeing someone” bomb. Who? But of course! The EWOK in fucking capri pants. Who is also a brilliant artist and is average height. Oh, Marnie. Don’t be so prude-ish and naive. Until you are no longer sharing him with a porcelain doll, you and the EWOK are not going steady.

OFF TOPIC SIDE NOTE: If Marnie’s now unpleasantly thin figure situaysh doesn’t result in an episode where Hannah stages an unwarranted intervention to confront Marnie about her “seriously unhealthy relationship with food,” before the end of Season 2, I’ll be very, very bummed.

So, Jessa’s still married. And sometimes, once you’ve been with someone for like, more than a month, you have to suck it up and do things you don’t want to do. Like have dinner with Thomas John’s parents.

Since she’s forbidden to bring up their matching tattoos, or their quick wedding, or the fact that they returned their puppies to the pet store, Jessa is really limited when it comes to conversation material. Not to mention, she hates this restaurant.

Somehow, Trader Joe’s I mean Thomas John’s parents drag it out of Jessa that she went to Oberlin College for seven months before dropping out in favor of rehab. For heroin, which is “delicious. It’s amazing. But you know if it didn’t ruin your whole body and your whole life we’d all be on it right now. You know, practically coming out of your eye sockets.” Also, her bout with heroin addiction may or may not be related to the fact that Jessa is tangentially mad at her mom. Or maybe she’s just a whore with no work ethic?

Thomas John’s protestant mommy is judging – no, worse! – juxtaposing Jessa with the ambitious women of her son’s past. Like Fern, who ran the Oprah Network. “We don’t need to talk about Fern,” Thomas John insists. Instead, let’s talk about Jessa. Let’s point out, please, that Jessa does her own hair. And that in the (short) time they’ve been together, he has never seen Jessa take heroin. Valiant last ditch effort to save the marriage, bro, but uh, Jessa is already flirting with your dad. “I love you. I love your way.”

Well, one month of marriage is better than no months at all! Right? Because at least Jessa has another story for her collection. About the one time she ended up with the only finance guy who actually made a profit from the recession. A miracle! A unicorn! A fucking needle in a haystack! But alas, she was just an ignorant hipster, telling her friends he was a test tube baby and munchin’ on his hay.

Also making $11,500. FYI I think Jessa is srsly underestimating herself. Not that I’m into putting price tags on pretty 20-something females, but if you’re going to accept bribery from your sad/slightly predatorial bumbling fool of a husband, aim for six figures.

Ohhhh, Jessa. Just two episodes ago you were lecturing Hannah about what it’s like when the hunt is over! Was this all part of the plan?

I want to believe that Jessa was expecting this. That, staring down at Thomas John from that formidable post on the stairs, she was already dreaming up her next adventure. And so, ready to move on, she flung his statue on the ground over the sad, satisfying whimpers of: “Don’t do that. No. That was my Humie. I won that for being a fucking humanitarian.”

Part 3: Cause all the roads we have to walk are winding…

When Hannah “innocently” (read: ignorantly) pressures Ray into divulging the details of his living situation, or lack thereof, Shoshanna and Ray are forced into a serious H2H in the Subway. In typical Shoshanna fashion, she’s mostly just upset that no one gave her ample time to prepare for this.

Okay, so, Ray maybe forgot to mention he was living with her, and he forgot to mention he loves her so fucking much, but on the bright side, he loves her so fucking much! In an adorable moment of vulnerability, Ray explains that he “wasn’t that excited to tell my beautiful, cute, smart twenty-one year old girlfriend that I’m a thirty-three year old homeless guy.” He tells her he’s been counting down the days until she figured out what a loser he is, which makes him seem really thoughtful about the whole situation. Then they blurt out that they love each other in this really brazen way that’s cute enough to make us forget that Shoshanna has just given her 33 year old boyfriend implicit permission to keep mooching off of her.

But I guess we’ll get to that next episode. In the meantime, Alex Karpovsky and Zosia Mamet look really cute together, and Shosh just got told “I love you” while wearing her hair in pigtails, which is basically a dream come true. So let’s be happy for them, and go join Hannah and Jessa in the bathtub, to say a final goodbye to Jessa’s marriage with a few tears and a comforting dose of weekly nudity.

Jessa does seem sad – enough to snot-rocket in the tub! – during this precious bathtub scene, but I wouldn’t exactly call it a moment of self-reflection. I think it’s meant to be more of a well-timed reminder that Hannah is sometimes likeable so we don’t hate her too much to tune in next week. And Jessa? I think she’ll wake up tomorrow, Hannah’s newest Big Spoon, check “reckless marriage to a dufus” off the bucket list, and continue on her never-ending quest for the hippest, most avant-garde way to get un-bored.