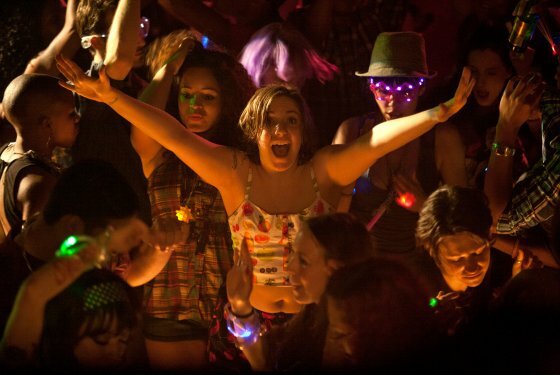 And the award for best-written Epic Coke Night Gone Super Fucking Wrong ever to exist on television goes to… Lesley Arfin & Sarah Heyward, for Girls Season 2 Episode 3: Bad Friend. (Credit also due to Lena Dunham and Andrew Rannells for their incredible performances. Those two must have snorted lotsa Vitamin B12 shooting those scenes, and props to them for taking it like champions.)

When I say “Epic Coke Night Gone Super Fucking Wrong,” I don’t mean “wrong” like not fun, or “wrong” like Hannah won’t have anything to write her vulnerability-exposing tell-all essay about after this experience. She does do it with Laird (sp?) at the end, so there’s always that. What I mean is the for serious kind of Wrong that happens when friends do drugs with friends then start feeling selfish and get thoughtless and treat friends poorly. If you’ve ever done/seen people on drugs and this doesn’t sound familiar, you should probably open your eyes more at parties.

The episode requires some suspension of disbelief at the beginning. Hannah is totally unprepared for her interview but gets an assignment. Bossy Blogger is powerful enough to act like a high maintenance B on the phone about sunglasses. Bossy Blogger suggests Hannah do a lot of coke and write about it. Hannah says she has weird nasal passages, but decides to give it a try anyway, because, well, YOLO, obviously, and also the magic so totally does happen outside your comfort zone.

So Hannah approaches Jessa, Shoshanna, and Marnie at the vintage sale they’re hosting, and asks Jessa for coke. Shosh says, “oh yeah no totally no all the junkies in my building totally hang out by the mailboxes,” so Hannah decides, instead, to approach her downstairs neighbor/junkie/addict, Laird, to procure some ayo for yayo. Which he gives to her.

Elijah picks out a “Power Clashing” outfit, inspired by a girl he went to middle school with, who fucked both her uncle and her stepdad. Because, he warns her, “this is not going to be a night of driving around in your mom’s volvo with a bottle of cough syrup and a box of cold nuggets.” But Hannah is “just so jazzed to write the fuck out of this story” that it doesn’t even matter. And away we go on our coke-venture.

Coke-venture part 1: To the couch. Where massages happen and Elijah’s jaw goes cray cray and Hannah blinks a lot while expressing some of her deepest desires:

Coke-venture part 2: To tha club, where Andrew Andrew, the brand consultant slash iPad DJ duo, is partying like it’s 1999. Lights are happening. People are dancing. Tambourine by Eve is bumpin’. Hannah and Elijah are on top of the world…for like twenty minutes. Obvi they need to do more coke, so they roll to the potty and crouch over a toilet seat like fiending dwarves and shamelessly shove white powder up their nasal passages, all the while talking and nodding effusively. They have like, this crazy honest heart to heart about their love and memories and Elijah is just feeling so fucking awesome that he wants to like, tell her everything, you know? He even wants to tell her about how he fucked Marnie because he’s just really accepting of himself lately, and it was an important milestone in his life to achieve, really. Like you know to accept himself.

Hannah does not empathize.

They argue loudly in an empty, well-lit pharmacy while Hannah goes nips-to-the-wind in a yellow fishnet situation that she acquired at tha club. Elijah calls her out for having eaten jerky. She says it’s not his concern. They find Laird, who has been stalking Hannah – just to protect her though! – and, naturally, invite him along on their coke-venture. But they may do it in front of him, so just, no crying.

Coke-venture part 3: To confront Marnie! Who has already been shown a dollhouse of broken dreams AND been locked into a claustrophobic TV-filled interactive art experience, all before being boned like a starfish from behind while looking at a sassy – “no, she’s sad!” – creepy doll placed next to the bed. Can we all ease up on the pretty girl already? Has she not suffered enough? … Ding. Dong. “Hi. Is Marnie here we’re friends of Marnie’s. We need to talk to Marnie about some things.”

In storms Hannah. Marnie and Elijah had sex. Now it’s clear! Marnie is the bad friend! Don’t even apologize, Marnie. That’s boring. Okay? Just recognize that Hannah is right and on top of the world and conquering her future and stepping outside her comfort zone, okay? She’s being an individual. She’s alive. It’s a Wednesday. She’ll wear shorty shorts if she wants to. But that’s not even what makes somebody a good or a bad friend, and since Hannah is an expert, Marnie, why don’t you just let her explain it to you, okay? And tell you everything you did wrong because you lied with your eyes. So just know that you’re a bad friend.

This speech (or Allison Williams’ inability to cry on screen?) makes Marnie have to leave the room to puke. But look on the bright side: Elijah is super glad this is all out in the open now.

Wow. What a display of feelings that was. I wonder if Hannah is offloading her own guilt about how she’s treated Marnie recently? If she’s treating the sex as a symbolic “now we’re even” act that wipes away all the time she ostensibly doesn’t have to be Marnie’s friend right now? I want to believe that somewhere, buried deep in that formidable brain of hers, there’s an inkling of recognition that friendship is a two way street. But we do not see any sort of inkling in this particular episode. Instead, Hannah blames the whole fiasco on Elijah, and insists he move out.

Coke-venture part 4: To home with Laird, who Hannah pins against the wall when he offers her a handshake. He asks for permission to kiss her back, and she says yes, but just for tonight. For work.

Sure hope she has enough material to expose all her vulnerabilities to the entire Internet, now.

← Want to Murder That Guy Who Just Blew You Off?
OkCupid Girls Love David Sedaris →