From Flavor of Love to I Love Money: Vertical Integration at VH1 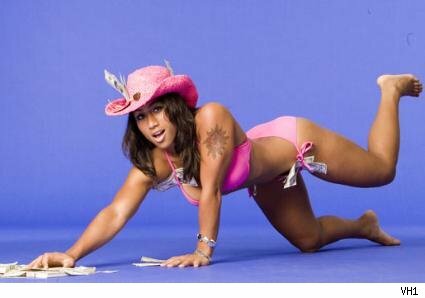 With the proliferation of dating websites, online profiles and matchmaking services, daters today have an incredible number of ways to meet each other. Truly, meeting the old fashioned way has become old fashioned. But amidst all of these new-fangled dating strategies, let us not forget the original Dating 2.0: TV Dating Shows!

This is the third in a series where I use my MBA class lessons to analyze the success of dating on television. Check out my previous entries on a statistical analysis of “Singled Out” and an economic view of “Blind Date.”

Up next: VH1’s Golden Age

If you were a fan of VH1’s “I Love Money,” then we just became best friends. I can’t blame you if you’ve never heard of it, because I’m pretty deep in the reality show game, but I implore you to trust me when I say: it was perfect. A kind of self-aware version of MTV’s “Real World/Road Rules Challenge,” which is inarguably the pinnacle of the genre, “I Love Money” pitted beloved personalities from across their catalog of shows against each other in physical and mental challenges. I was thinking about the show recently as we discussed Vertical Integration in my MBA studies. “I Love Money,” I believe, was the culmination of a Vertical Integration strategy at VH1 that successfully farmed homegrown talent to create an amazing slate of dating programs.

As I do so often every once and awhile in my MBA studies, let me consult Wikipedia for a quick background on Vertical Integration: “Vertically integrated companies in a supply chain are united through a common owner.” That is, a company uses their own proprietary supply chain to develop several unique products.

During this golden age of VH1, for example, the network utilized one “supply chain” (common characters and plot formula) to produce a number of different shows. “Flavor of Love” begat “I Love New York,” which begat “Real Chance of Love,” and “Frank the Entertainer: A Basement Affair.” OH BUT THAT’S NOT ALL. “Flavor of Love” also inspired “Rock of Love,” which begat “Megan Wants a Millionaire” and “Daisy of Love.” All of which, of course, contributed cast members to “I Love Money.”

What happens when you cull the best and brightest from seven different reality shows and put them together in their own competition? PURE. GOLD. I mean, look at these bozos!

Anyhow, I believe that the same qualities that made Vertical Integration a successful strategy for creating great television can also be applied to the relationships that people sought after within these shows. For example, who among us hasn’t met new people through friends we already know? That’s because dating people that our friends have vetted minimizes the risk that they are huge weirdos. Vertical Integration, folks! Whether you call it “leveraging the supply chain” or “stalking my roommate’s Facebook looking for attractive friends,” it’s a proven strategy. What else can we learn from VH1’s programming? Let’s look at it show by show.

“I Love New York” is a textbook case of risk reduction. New York, aka Tiffany Pollard, was quite obviously the breakout star of “Flavor of Love,” appearing on two seasons and creating water cooler talk galore with her HBIC antics and long disgusting kisses with Flavor Flav. Of course she was a scene stealer, the girl was (is?) absolutely bananas. Read: great TV. VH1 recognized this, thank god, and gave us all the New York we could handle. “I Love New York” ran for two seasons, AND she starred in two other spin-offs for VH1, “New York Goes to Hollywood” and “New York Goes to Work.” Let this be a lesson to us all, in our relationships and business ventures alike. If things are going well, let the good times roll.

Dating Lesson: If it ain’t broke don’t fix it.

As a Chance superfan, I was more than excited when Chance and his brother Real (my lord, those nicknames) were given their own show to look for love. What I remember most about this show was how strange it was to see the same girls hooking up with both brothers. Somehow I was not yet immune to televised make-outs between might-as-well-be-strangers when this aired in 2008. Who knows, maybe if it aired today I wouldn’t be so shocked. Reality TV has come a long way.

But anyhow, are you thinking what I’m thinking? That house looks familiar doesn’t it? Well, that’s because “Real Chance of Love” was filmed in the same location as “Daisy of Love” and “I Love New York” season two! Man, do you think all three were filmed during the same leasing period? In Business School, we call this “lowering our transaction cost by maximizing resources.” Maybe that’s why VH1 made so many of these damn shows; they were probably cheap as all hell to produce. God knows the contestants weren’t demanding too much salary to appear on the show. Especially for “Real Chance of Love.” Anyone who calls themselves “The Stallionaires” must be independently wealthy.

Get ready for a shock: I didn’t watch this show. I chose not to out of principle, because of the laziness of the title. Really, VH1? You couldn’t come up with a better pun? Couldn’t go with “Daisy Gets Picked” or “Daisy plays the Field”? It took me less than 30 seconds to think of those and it isn’t even my job. Also, I ADORE the host, Ricky Rachtman, so my not watching the show really says something about the title’s level of terrible. I’m not even mad, VH1, I’m just disappointed.

If you’ve ever used the phrase “don’t threaten me with a good time” or dressed as Bret Michaels for Halloween, then you owe a debt of gratitude for “Rock of Love.” (I expect this covers roughly 70% of the population.) It was really one of the greats.

I think what made “Rock of Love” such a riot was that it was basically just a wild party. On more than one occasion, the ladies could barely make it to the elimination ceremony due to long bouts of drinking by the pool. And can we talk about their outfits? Their be-studded tattoo bearing bandage dresses? Phenomenal. Also, call me crazy, but I think some of these women really did love Bret Michaels! What a trip to watch them swoon whilst he sang “Every Rose Has It’s Thorn.” Which, you know, was roughly 1.5 times per episode. The bottom line is, we had fun watching them because they were genuinely having a great time. Our takeaways here are that relationships should be full of laughs, unabashedly sexy, and more often than not, FUN. Rock and Roll lives!

Dating Lesson: Don’t be afraid to let your hair down.

Also, shout out to Heather from “Rock of Love” season 1, who went on to make a pretty great cameo in “It’s Always Sunny in Philadelphia.” Yeah, I know. I watch too much TV.

Let’s be real. The producers of this show knew exactly what they were getting, and what they were giving to us. A hot girl who wears bikinis. Presumably viewers of this show didn’t want too much more than a hot girl in a bikini, because they certainly didn’t get much more substance. But hey, isn’t that what successful relationships are all about, managing expectations?

Dating Lesson: As Jalen Rose would say, you’ve got to give the people what they want.

Frank the Entertainer: A Basement Affair

I’ll admit it, I’m attracted to Frank. I may or may not have seen him once at a pizza place in San Francisco and freaked out a little inside. (He was shorter than I expected. Aren’t they always?) My point is, sheer attraction must have been the only reason any of these women competed for his love. After all, the entire premise was him living in his parent’s basement without any job prospects. And this is before the Jersey Shore kids made it cool to live at home. Somehow, his authenticity about his situation made him endearing. Yikes, did I just use the word “authentic” about FtE:ABA? Apologies.

Dating Lesson: Be yourself. The heart wants what it wants.

In closing, let us have a quick moment of silence for the gone-but-not-forgotten “I Love Money.” Its third season was filmed, but did not air… due to truly depressing circumstances that I won’t get into here. Google it if you’re looking for a downer. Anyhow, thank you to VH1 for utilizing a Vertical Integration strategy that brought us some of the greatest characters and dating shows to ever grace TV. Thanks for the laughs, VH1. Though these shows may be gone, the sage relationship lessons within them live on.

Thank you Crushable for the I Love Money pic!

Be wary of persons on chat lines who try to coax details out of you that feels too private. sweetbabyray onlyfans The web site is increasing really fast with 2017, new members signing up every single week and also has app versions totally okcupid with iOS and Android platforms and the site is finest friendly also. On this chat avenue customers web site engage in random chat with strangers and different other chat associated activities. salma hayek dating The primary purpose we’re so convinced that online dating is the spot to meet ladies? Each day we hear the actual-life achievement stories of couples who fell in appreciate on our web-site.