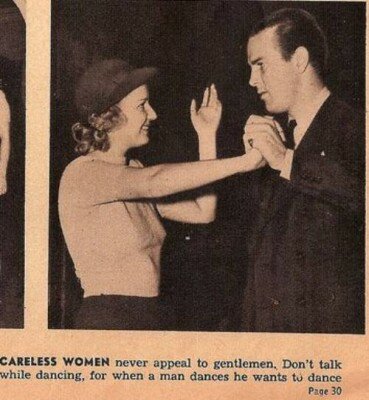 Thanks to a heads up from the fabulous L is for Foxy, I came across an amazing archaeological find – scanned pages from a dating guide that was published in 1938. Written for single women (I hope that doesn’t surprise you! Men don’t need advice on this sort of thing, remember?), the guide features illustrated pearls of wisdom such as:

“Careless women never appeal to gentlemen. Don’t talk while dancing, for when a man dances he wants to dance.”

“Don’t be familiar with your escort by caressing him in public. Any open show of affection is in bad taste, usually embarrasses or humiliates him.”

“Don’t talk about clothes or try to describe your new gown to a man. Please and flatter your date by talking about the things he wants to talk about.”

“Don’t drink too much, as a man expects you to keep your dignity all evening. Drinking may make some girls seem clever, but most get silly.”

(What? You think the advice from this 1938 book is scarily similar to everything you read in The Rules, which was published in 1995? Well…you said it, I didn’t!)

I’m not only sharing this because the photos that accompany each wrongdoing are totally hysterical. Just the final photo is classic, depicting a woman who is passed out in a restaurant booth, presumably drunk and exhausted from talking about her wardrobe, while her disgusted date pays the bill.The photoalso includes an unidentified man who is shaking his fists in rage towards the sky – who knew that dating faux pas could make someone so angry?

I’m really sharing this because, for me, it was a stark reminder to appreciate the current dating scene, in all its ambiguity and uncertainty. We can all get caught up in the confusion of it all: what does his text mean?? Why does he keep inviting me to parties instead of taking me out one-on-one??How do I know if he’s stillhooking up with other people?? It can be tempting to wish that we could go back to an earlier time, when romance involved rules and guidelines and social scripts that told us what to do and what to expect.

But if we could just learn to embrace the post-dating world, and stop ourselves from getting so frustrated and impatient, then we could figure out how to navigate it in a way that works best for each of us. I would happily give up a bit of clarity for the freedom to chat while I’m dancing, kiss a cute guy in the corner of a bar, share my interests and passions and opinions with a date (or Non-Date), and tipsily flirt over one too many cocktails. We have to believe that this ambiguous reality, while maybe not leading to love quite so easily, will allow us to truly get to know each other, and explore our many sides, flaws and all, before settling down. I’d rather alienate any guy who wants me to follow some prescribed set of rules than pretend to play the game and lose him, years later, when he finally realizes that I’m not actually that person at all. It may take longer to get to the relationship, but the relationship itself should be that much stronger as a result of taking such a complex and idiosyncratic road to get there.

Seriously, people. Let’s make this work for us!

Consuming tiny to no graphic Tv, Lisa Ann likes to maintain it light and constructive when watching television. amanda cerny playboy centerfold Bear in thoughts that there s a limit to an on the internet dating service s potential to do background checks or verify someone s identity. If the participant nevertheless appears upset or agitated, bring the session to an early end. my ll bean boyfriend In figure 3, an instance of how the queries are displayed is shown in a screenshot from eHarmony s web site .

← The Post-Dating World and The Decision To Love
Who Do YOU Think Is In My League? →

com This amazing site has all types of singles, but an especially massive quantity of MILFs. Noto iphone dating - men prefer older women Though choosing the appropriate software program via the range, we favored the web site that genuinely renders precise meets in my town. I delight in which critique gives this sort of an index of a connection applications. listcrweler Very same search can be enriching and sexual pursuits.

Also recognized as the world s largest sex and swinger community, the site doesn t hide that truth with euphemisms. skipthegames okaloosa fl Do you have a certain sexual fantasy but troubles locating a particular person that wants the similar factors? Getting a short term companion, lover, or even a one night stand has never been a lot easier, thanks to the online and the numerous web sites that are specially developed for locating any sort of hookup. She eats properly, performs out, and clears out toxic people today from her life. january jones baby Some theme nights incorporate leather and lace, a glow celebration and toga evening.