Register | Login
From Earth With Love

Being a Human is Hard: A Tale of Intergalactic Self-Discovery 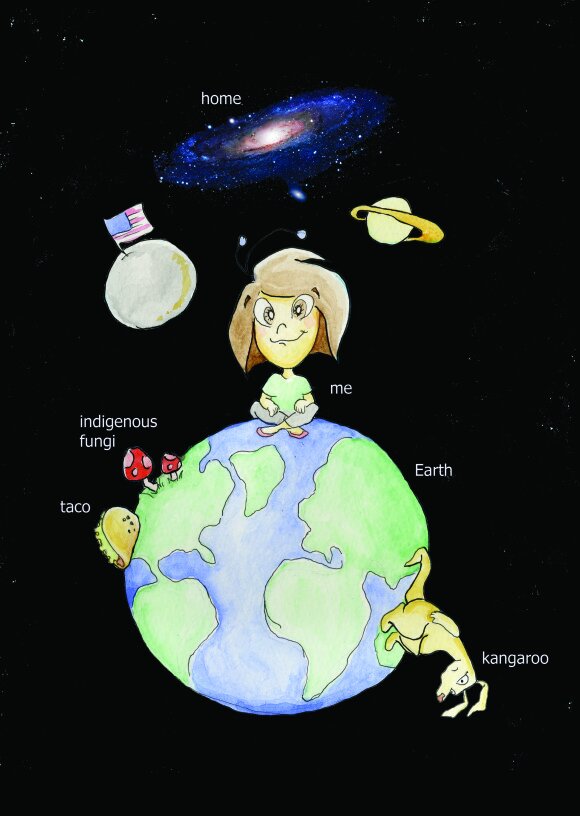 I am an alien from outer space. I was banished here by the rulers of my home planet for a perceived misdeed, to observe life on earth while disguised as a human female. I am called L.

It all started a while back, when I got pinched for intergalactic shoplifting.

I was just minding my own business one day, doing a little light shopping, when out of nowhere The Intergalactic Criminal Police Organization, also known as Space INTERPOL, also known as SPINTERPOL, apprehended me and took me to Space Court. They were like, “She’s guilty!” and I was like, “No I’m not!” and they were like, “Yea you are, we have you on film at multiple Trader Yoda’s locations throughout the Local Cluster, your face is clearly visible in every instance, blah, blah, blah.”

Look, obviously I am innocent of these charges. Obviously, a being with my level of integrity would never do a thing like this. Obviously those surveillance videos were totally fraudulent because I was obviously framed.

But the jury didn’t see it that way. Instead of sending me to Space Prison, however, they decided to hand me over to the Council of Interdimensional Species Activity, so I could work off my alleged debt to society. That is how I came to be exiled on Earth. I was sentenced here to do research.

It’s hard being a space alien living inside of a person. There are still so many things I can’t get right! How not to act weird at funerals, for example. Remembering to send cards to people, for another. There are a ton of rules to keep track of: eat, sleep, brush teeth, obey social cues, avoid creepy eye contact! It’s taken me a long time to get used to how things work within the confines of society, and it’s hard to balance it all while trying to stay focused on my mission.

Every 10 Earth Years I am required to beam a transmission back home and report my findings to the ISA Council. The Council reviews my performance and determines the effectiveness of my research here. If the review is good, I get to stay and continue my work. If it’s bad, I get booted from the program, leave the Earth, and serve my full term in Space Prison, where I’ll no doubt face unspeakable horrors.

Unfortunately, my transmissions have a history of not going very smoothly.

My first transmission, at Earth Age 10, in Earth Year 1994, was spent rambling ceaselessly about American Girl dolls. I thought the Council would want to know all about how the pioneers settled the west, and the frilly pinafores they got to wear. But the Council was like, “L, none of this is super relevant, we’re going to need you to think bigger.”

But I didn’t know what they meant by “think bigger,” and I got scared that I’d never figure out all the stuff the Council wanted me to figure out. It was too much pressure! Plus I was still pissed as hell at the whole galactic judicial system for even making me do this stupid thing in the first place when I’m so obviously innocent of shoplifting. So to rebel against the fascists that put me here, I started majorly slacking off in my responsibilities, disregarding the danger to my future and to my already-questionable reputation as a researcher. When it was time to present my findings to the Council on my 20th earth birthday, I came up short in a big way.

My methods for extracting the information I’d been sent to obtain were deemed insufficient.

I had not applied myself fully to the task at hand, they said.

I was too distracted by silly things, they said.

And their words rang true. But mostly I was afraid that the humans would see me for what I truly was: a space alien, half-heartedly trying to redeem herself—through the pursuit of science and servitude—in the eyes of the noble institution she had wronged. Allegedly.

Thanks to my second underwhelming transmission, my progress as an ISA observer was declared inadequate. The Council was most displeased. There was some scary talk of deactivating my earth body and transporting me directly to Space Prison, but they mercifully decided to give me one more chance to prove myself. On my 30th earth birthday, in the year 2014, I will make my third transmission, the one that will determine my fate.

I know by conventional standards that becoming 30 isn’t a huge deal because the humans do it all the time and it doesn’t require any skills. They just have to stay alive for 10,950-ish consecutive days, most of which are spent focused almost entirely on making themselves happy. Soon after my second transmission, I too began to develop a familiarity with the happiness emotion, usually through my canine companion and my television. I also like snacks, flowers, and the rock n roll.

I finally decided that Earth’s not a bad place to get banished to, but I knew the ISA Council would want more insight into the earthly experience other than how ground-breaking some TV shows are. I had to figure out what my work was missing, and fast. Like, within the next 10 years fast. Which is pretty fast for me.

I began to notice that as the humans get closer to 30, they take on more responsibilities and set higher goals. Despite their ever-increasing list of commitments, they know that if they’re actually going to live the life they imagine, they have to work hard for it. And even if they work super hard, there’s still no all-encompassing state of total happiness for a human, where each area of their life is exactly the way they want it to be, all at the same time. Their world is always in flux, so it’s impossible, even for the elderhumans and the babyhumans, who do a way better job of relaxing about things.

I spent lots of time educating myself on the Google, and recording my very important thoughts and feelings in my Earth log. Many experts, including well-known human Oprah, recommend doing this for clarity and peace of mind.

As I continued to carefully study the lives around me, I found it easier to tell whether the people living them were at peace with the way things were (like, in general) and the ones who were, it seemed, had simply made their minds up at some point to make the best of their Earth Time, no matter what. Which is just another way of saying that life is what they make it.

Eureka! I thought. I have to make a life, then I’ll know what it truly means to be one of them! This meant that I couldn’t be just an alien tourist anymore. That as scary as it was, I had to become an earth participant. I began to put the pieces together, to assimilate more and more, and gradually I gained an understanding of how the best earthlings roll. Was it super confusing and awkward? Yes. Painful? At times. But I had no choice. My freedom depended on it.

So on this, the eve of my third transmission, I’m finally prepared to put all the hard- won lessons over the past 10,950-ish days to good use when I make my presentation to the Council. I want them to really get a sense of what the human feels, what it learns, what TV shows it likes, and why it likes those shows. But it won’t be easy for them to overlook my first two horrible transmissions. I will have to work extra hard to engage them, and to make them not want to send me to Space Prison. It will be the greatest challenge I have ever faced on Earth. Or any other planet, for that matter.

← Crushaholic: Thou Shall Not Covet Thy Algebra Teacher
How To Reject Someone →