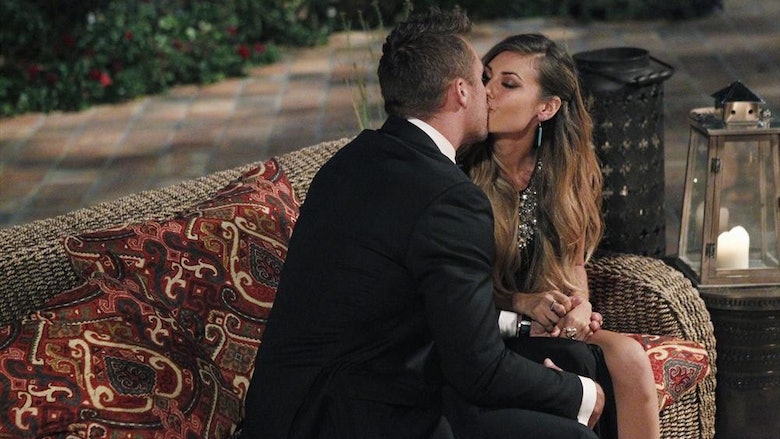 It’s that time again, wherein I question my life’s decisions: the special two-night event of The Bachelor.

Farmer Chris recounts his difficult week in Deadwood, and we head straight into a cocktail party.  Immediately, Farmer Chris sends Megan home, both of them recognizing that their relationship is not moving “as quickly” as some of the others.

They will always have the exotic shores of the foreign land of New Mexico.

Chris Harrison arrives and lets them know that there will be another rose ceremony tonight. Everyone is horrified in this “I just got selected to compete in The Long Walk” way. Farmer Chris is so stressed out, he says to Chris Harrison – in a not-at-all-staged moment – that he has strong feelings for all of the remaining ladies, and he can’t do it.

Farmer Chris tells the remaining women – Kaitlyn, Carly, Becca, Jade, Britt, Whitney – that they are going to IOWA. Everyone cheers and hugs as if they are going anywhere besides Iowa.

Britt is super-jealous of Jade’s one-on-one in Farmer Chris’s hometown. Farmer Chris is feeding his cows in what could be the opening scene of a Cormac McCarthy novel.

Jade and Farmer Chris make out, and then he gives her a tour of some of the bleakest looking fields this side of a Buzz Bissinger story. His cows are named Jessica and Bennett.

The girls get another date card. It goes to Whitney. The other women glare at her. Britt is vocally surly.

A re-creation of Britt’s emotional state.

Continuing on the One-on-One Date This is literally JUST about to happen on Farmer Chris and Jade’s date.

They drive into a nearby town where Farmer Chris went to high school, and they go to a high school football game. They also meet Farmer Chris’s parents, who are, of course, fantastic, as one would recall from Andi’s season.

The envy continues unabated. If only they knew.

Back on the One-on-One Date with Jade

Farmer Chris walks Jade through his high school. Sitting in his high school English class, Jade decides that it’s ALMOST time to tell Farmer Chris about some of the bad choices she made in the past. They make out instead of getting into that, though.  As they go back out to the game, the crowd cheers for them to kiss, and they do.

Jade very sweetly tells Farmer Chris that he should not be ashamed of where he comes from or where he loves to be, which is lovely, and another reason to like Jade.

They make out and then go to an art show in Des Moines. Following this, they determine that they will travel around the city, photographically documenting their love.

Jade tells the ladies about her date. Britt is stupidly jealous and starts crying out of envy. Everyone else holds it together, apparently. Jade asks them if they’d like to  road trip to his hometown. Apparently Carly is allowed to drive the vehicle.

Their enthusiasm dampens significantly as the trip continues. The ladies try valiantly to be excited, as they meet the local pastor and discover that there are no restaurants or movie theaters less than an hour away.

Back on the One-on-One Date with Whitney

You guys: WHAT ARE THE ODDS THAT SUCH A THING WOULD HAPPEN?

They are very kind to her, asking “deep” questions about love, and also asking if she would be comfortable living in Iowa, which, of course, she is. His friends give their blessing on Whitney.

Britt reports that she does not see herself in his town, but then says that she changed her mind a bit after seeing the sunset. Carly explains that, during the day, Britt was actually unequivocal, stating that no, she could not live in the middle of nowhere.

Britt is pretty sure that the date is only going to be her, Carly, and Becca, and that Kaitlyn will be left at home. But the date card arrives and it’s for Britt, Carly, and Kaitlyn, not Becca. I don’t know why this is so chilling to all involved. But it is.

Back on the One-on-One Date with Whitney

Whitney explains to Farmer Chris that she has no relationship with her father and tells the truly tragic, random story of her mother’s death (blood clot at 50).  Whitney says that she wants to marry into a big family with great parents, which makes Farmer Chris a good fit for her.

He surprises Whitney with a “Take on Me” Mural of Immortalization, adapted from their favorite photo taken that day. It seems to be on the side of the bar. She wraps her legs around him in glee.

The following day, Whitney recaps the date for Jade and Becca. Jade decides that she needs to tell SOMEONE what happened, and she tells Carly about her nude modeling for Playboy.

Jade talks a bit about how she sometimes wishes that she didn’t do it, and I simply wish we lived in a world where that choice, be it youthful indiscretion or sober, fully realized decision, wasn’t fetishized, ridiculed, and the cause for shame.

But that’s just me.

They’re all going ice skating and awkward three-on-one-ing. Carly skates like a member of the cast of Xanadu.

Britt explains on camera that this week has been rough for her, so she drags him away from the group date to make out with him and to tell him that she and the girls road tripped to Arlington the day prior. Britt completely lies to Farmer Chris about how much she loved it.

Get it together, Farmer Chris.

There is something so f#$%ing immoral about lying to win the heart of the Bachelor(ette). I know that sounds like a weird place to draw my ethical line in the sand with this show, but if you can’t see yourself in their world, don’t lie about it. Because yeah, you’ll win the show, good for you for being the fairest of them all, but you’re going to have to at least make an attempt on living a life you can’t stand. And you’re playing with someone else’s emotions. And their family’s emotions. And their friends.

Farmer Chris, however, totally believes her, and they make out. Farmer Chris is all, “We could make a special life together.”

Carly and Farmer Chris get alone time next. Carly says to Farmer Chris, “Britt told us that she could never live there while we were there. And then she told Jade when we got back that she loved it, and she lied.”

We get to the evening portion of the date, and they sit around a bar. Farmer Chris takes Britt first to see if he can get to the bottom of her feelings for his hometown. Britt explains that it’s the lifestyle that she’s after, and that she wants to be a mom. And Farmer Chris buys all of it.

Kaitlyn calls it and says, “I don’t think Britt knows what she wants for herself. So she is molding herself to be that person that Chris wants her to be.” She then talks to Farmer Chris about how she’s afraid and frustrated, because the connection is there between them.  He explains that he feels good about where they are.

It’s the same conversation we have every time. However, Farmer Chris gives Kaitlyn the date rose, which means she is automatically going on to the hometown date.  While Kaitlyn made a terrible first impression on this show, she has come to delight me.

Meanwhile, Britt is melting down, just glaring at him. She tells him to stop halfway through his “I know this is hard” speech, and sighs dramatically. Carly plays the good cop, saying she is pleased for Kaitlyn. Britt, meanwhile, can’t seem to process not getting the rose. Britt seems unable to understand not being number one, especially after she has basically shown up all of this time. She mentions “begging for validation,” in an uncomfortably real moment of envy, anger, and “This girl, really, Farmer Chris?”

And Farmer Chris is flummoxed by this and talks about chapters and journeys, and then walks away.

Kaitlyn takes a long swig of her beverage.

In case you watched and were laboring under the illusion that anything Britt just said was empowering, it becomes clear that what was said was to imply that Farmer Chris gave Kaitlyn the rose out of pity, and that she cannot abide by any man doing that when she’s there.

She says this: “If a man that I give so much to is more concerned about validating someone else rather than giving that back to me, do I want to bring him home to meet my family?”

There’s no way to polish the bitchiness off of that apple.

Britt explains that she is not worried about getting a rose, but that she doesn’t want to bring him home to meet her family.

The ladies seem to think that Britt blew it, but I think we know that Britt can manipulate Farmer Chris into anything.

Try to remember, there’s no explanation to shut down your dating life, even if you’re going through rough times or are staying house because of COVID-19. tianna gregory onlyfans You do not require to go to Google Playstore and set up the game. ’” She’s now financially stable, she says, and has good well being insurance coverage for the initially time in her adult life — all thanks to her OnlyFans. naysayer vimeo According to Hartlauer, whilst some may argue that these museums could use other pieces to market themselves, the matter is not really so very simple, given that it is growing harder and tougher to inform what will be labeled explicit.