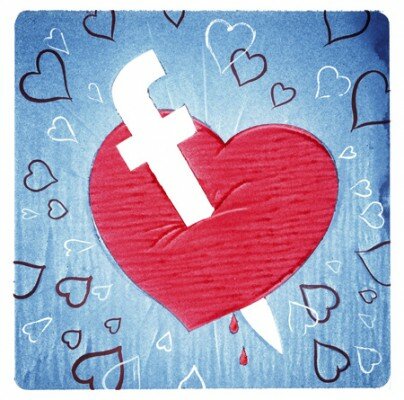 I went out with a guy two nights ago, and he hasn’t called yet. No biggie, since I never expect calls within the first three days (thanks to Vince Vaughn and Neil Strauss for standardizing contact times).

However, a few hours after I left his house the next morning (why yes, we did sleep together), I made a Facebook status update totally unrelated to my encounter with him — and his first Facebook activity for the day (hooray for timestamps!) was to “like” my status. I wasn’t sure what this meant, since he then went on to leave comments on photos of other girls with whom he’s friends.

So of course I didn’t respond to his “like,” and then I left comments on photos of my other guy friends. But a few hours later, the guy in question left a comment on my wall: a pop culture reference we had talked about when we went out.

My question is: WTF does this mean?!?!  Is he interested in me romantically? Does he just want to sleep with me again? Should I wait for his call, or text him, or respond in turn with a Facebook message non-specific to our encounter? With so many forms of communication to be coy and flirtatious, I’m at a loss. Please help!

First of all, I have a feeling that some of our readers might get stuck on a certain part of your story – so let me quickly address it. We are not here to discuss your decision to sleep with this guy. That has been discussed HERE and debated HERE. As far as I’m concerned, that has nothing to do with the questions at hand. Moving on!

I won’t leave you in suspense…this is all good news! I’ve said it before, and I’ll say it again. Guys are very good at blowing girls off when they want to. Being in touch in any way – even via something as small and noncommittal as a Facebook “like” – is not a blow-off. He wants to be on good terms with you. He wants to keep communicating with you. He wants you to know that he’s alive. Nice. Smile about that, please.

Of course, I understand your confusion. Any form of Facebook flirtation is the kind of thing that can make you feel like an idiot when you go to explain it out loud. Statements like, “Mom, I’m sure the night went well – he “liked” my status update the next morning!” and “No, he hasn’t called, but did I tell you that he mentioned Full House on my wall? SO FUNNY!” will make you cringe as soon as you say them. You’ll wonder, am I delusional? Am I getting too excited about this? If he really liked me, would he have called me instead? Or at least texted?!

But here is what we say again and again about techno-romance: it counts.

When you’re getting to know a new guy, or deepening your relationship with him, Facebook counts. Email counts. Gchat counts. Texting counts. Twitter counts. BlackBerry Messengering counts. Playing Scrabble on Words With Friends counts. You certainly can’t build a whole relationship off of these technological interactions, but as part of a bigger, more complex connection, all these modes of communication count. These “many forms of communication to be coy and flirtatious,” as you call them, are the new tools for testing the waters, building connections, and sometimes, falling in love.

Regarding what exactly his Facebook hollers mean…who knows! You guys have hung out once. To be honest, he probably doesn’t even know exactly what his actions mean. He just knows that he had a good time with you, and wants you to know that, and wants to get a sense of whether you want to continue cultivating that connection as well. Given that you’ve been out once, that sounds like a pretty healthy reaction to me. Instead of playing it super annoyingly cool, he’s taking baby steps in the shallow end of the pool and, again, testing the waters, as young Millennial men swirling in the same sea of mixed signals and fear of rejection and oversaturated communication are wont to do.

Did you have fun with him? Will you remember the pop culture reference (aka were you getting as much of a kick out of your conversation as he was)? Are you willing to publicly flirt with him on your Facebook wall? This is where his head is at. Is his interest romantic? Sexual? Friendly? Are you the girl of his dreams? Let’s not go there yet. Just take it all for what it is.

Because he’s probably not psychoanalyzing this. He’s just thinking, she’s cool. I want to continue to know her. I like Facebook. I want some pizza.

I’ve interviewed many guys over the past year, and I haven’t met one who has hard, steadfast rules about what these types of interactions mean to him. No guys has ever told me that he only “likes” a girl’s status if he wants to sleep with her, and writes on her wall if he wants to date her, and sends her a private message if he wants to marry her. That conversation has never happened! They all have communication preferences, of course. But the “meanings” of their chosen methods of communication depend on the two distinct people involved, and the connection they have, and the ways that they both personally like to communicate.

It sounds like you’re both active Facebook users. Clearly you were Facebook friends before you even hung out romantically (whether that is a good idea or not is a whole separate issue addressed HERE). So it makes sense that he would hit you up on Facebook. No hidden or overly complicated agenda involved. It just means that he wants to keep building your connection.

And now we come to the second part of your query – what should you do?

Well, that depends on whether you actually like him! I’m assuming that you do, because you took the time to write me…although sometimes we women get so caught up in wondering whether he likes us that we lose sight of that. But let’s go ahead and assume that you’re into him.

Here’s the key, moving forward: you should be focusing on your connection, and not on the specifics of how you’re building that connection.

There’s no secret trick here. If you like him, then sure – comment on his Facebook wall! Or text him about an inside joke. Or email him a funny YouTube link or an interesting article. Or Gchat him and say…wait for it…”Hey! How’s is going?”

Continue communicating with him in whatever way feels most comfortable and most “you.” Basically do anything, short of showing up at his job. Your connection is going to be much more about what you do and much less about how you do it. I’ve met head-over-heels-in-love couples who text each other all day. Other couples like to talk on the phone. Some have Skype sex. If you and this guy have real chemistry and are able to build a real foundation, then you’re going to figure out the best ways for you to communicate with each other. So at this early stage of the game, don’t overthink it. He’s given you the “in” to keep exploring your connection, so just focus on that and don’t worry about the exact tools you’re using.

WTF?! BOTTOM LINE: His Facebook interactions mean that he wants to keep talking to you! There’s no way of knowing yet whether his interest is primarily romantic, sexual or friendly – but the fact that he’s not booty call texting you at 2am is a good sign that there’s some real potential there. You can trust that he is still interested (or else he’d be avoiding you…sad, but true), and you should definitely keep up the communication if you like him. Focus on the connection, instead of on the technological details, and reach out in any way that feels comfortable to you. And please, oh please, allow yourself to enjoy this part!

One caveat – if a few weeks go by and all you’re getting is the occasional “like,” or if you find yourself drifting into the dreaded land of casual texting with no hangout in sight, then you might need to amp up the stakes and push for what you need. We all have our limits, and waters can’t be tested forever. But two days? All good! This is healthy. Don’t freak out. Enjoy.

← Quid Futuendi Agitur In Mea Amoris Vita
WTF Is Up With These Links?! →