Ask Jess #13: Can dahs Overlap Without Causing Jealousy and Awkwardness? 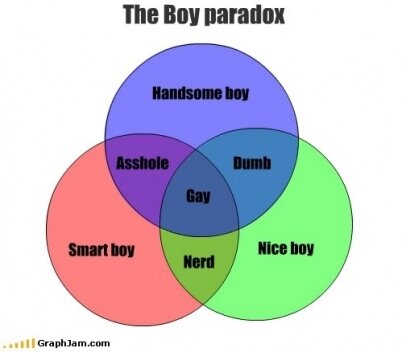 I have a guy in my dah who has served as a combination Ego Booster/Accessory, and I’m fairly sure that I fill the same role in his.  Neither of us have expressed a particularly strong attraction to one another, but I definitely turn to him for much-needed compliments after a blow-off and we often accompany each other to parties or other social gatherings where one might not like to show up alone. In the wake of a very rough crumbling romance, it’s been nice to have someone to spend time with while I get my head straight to date (or non-date) again. At the end of the day, I’m pretty sure that we’re not interested in being a couple. But having someone around who is always up for dinner, a movie, commiseration, and mutual ego stroking is comforting.

Recently, I met him and a few of his buddies for drinks and brought along a female friend/co-worker.  The two hit it off, exchanged phone numbers (and a little saliva), and made plans to go out on a traditional date.

The next day, both of them asked me if I was okay with the situation. I answered honestly (mostly) that it was a little weird, but that overall, I didn’t have a problem with it.  I don’t want to root for it not to work out, because I want my friends to be happy. But I don’t know if I’m cheering for success either, because I very selfishly don’t want to lose my Ego Booster/Accessory.

In this messy world of new friendships and evolving connections, what do I do when dahs overlap? When my Ego Booster becomes her Boyfriend Prospect? How can we share dahs without resorting to the petty and stereotypical jealousy that so often destroys female friendships?

Not Sure If I Should Be Jealous

Once upon a time, maybe back in 1989 or so, people went on dates. These “dates” made things seem fairly black and white. No one would blame you for saying to a friend, “FYI, I went on four dates with that guy – so if you could not make out with him at a bar, ever, that’d be awesome. Thanks! Best Friends Forever!” (I’m pretty sure “BFF” didn’t exist in 1989.)

You didn’t date a guy who your friend was dating. Period. Easy.

But now! In this post-dating world of dahs and non-dates and techno-romance, all of which may or may not mean something, the lines are blurred. Overlapping dahs are basically inevitable, considering that almost every guy you know is probably, somehow, in your dah. And thanks to work and fun and technology and the fact that we Millennials like to keep ourselves so damn busy, our networks are wider and deeper than any previous generation’s. So people you know are going to meet other people you know, who are then going to meet other people they know, and it’s going to be one crazy, incestuous dahfest.

So what to do?  How to feel? When to sound the alarm?

Let’s take a look at how Becky and I handle this sensitive issue. Because, clearly, we are the golden standard of female friendship! And as best friends, business partners and sometimes-roommates, we wouldn’t be able to avoid knowing all the same guys if we tried. No, really…all the same guys. Yet zero blips in our friendship later, I like to think we’re on to something.

Just because you saw him first does not mean that he’s automatically in your – and only your – dah.  He gets a say in this, too. He’s allowed a chance to be more attracted to your friend than to you (I know, ouch! but it’s happened to all of us, and we’ve lived to tell the tale, so toughen up and find someone else to flirt with).

You can’t imagine the number of guys who shake their heads at me and marvel in wondrous fear and amusement at the female tendency to instantly declare interest in a guy so that her friends can’t touch him.  Sure, a general, “Oh, he’s cute!” is fine. But an, “Oh he’s cute! (aka you’d better not even make eye contact with him because he’s mine)” is crazy. If you think he’s attractive, then other girls probably do, too. So he’s fair game. Yes, for your friends as well.

Of course, even in the lawless post-dating world, there are turning points in your relationships where you’re justified in drawing the line. If something official is happening – you’ve gone on a date, you’ve hooked up, you’ve explicitly expressed interest in each other – then you have a right to alert your lady friends, who should know instinctively to back off. But just because he smiled at you? Sent you a few funny text messages? Friended you on Facebook? Agreed to be your beer pong partner after that soccer game? Those ambiguous signs do not a dibs call make.

I get it – you felt like you were exploring a connection with him, however slowly it was moving. You probably were. You’re not crazy or delusional. But if he hasn’t shown clear, obvious signs of interest above and beyond ambiguous friendship, then he’s still fair game.

2) Don’t be secretive or shady – talk about it with your friend!

Your friend – and your Ego Booster/Accessory – absolutely did the right thing by running their courtship by you.  These are both good friends. Don’t f**k it up because of silly ego issues. Communicate.

Now, you don’t have to be weird about it.  Becky and I don’t immediately categorize every new guy we meet into a dah type, and then sit down with an Excel chart and divvy him up. I don’t introduce her to a guy and then pull her aside to whisper, “Just so you know, he’s my Ego Booster – what are you thinking?  Accessory? Hot Sex Prospect? Boyfriend Prospect? Do you want me to stop talking to him?” It’s usually not that serious.

But when Becky or I have a dah Alert concerning some guy we both know – when one of us really feels something for him, or when things get really touchy, or when our connection evolves and we realize, holy crap, this guy and I connect! – we tell each other. We discuss it. It usually takes the form of friendly gossip or catching up, but we both get the point. Openness and honesty. She knows what him and I have going, and I know what they have going. And it’s rarely the same thing. But the key is to avoid secrets and shadiness at all costs.

So suddenly he’s someone’s Boyfriend Prospect. What next?

3) Whoever likes the guy more gets to explore it further.

Cultivating a dah is supposed to be a lot of fun. Interacting with guys is supposed to be a great part of your day, instead of a purely stressful one (despite what other “relationships experts” may have you believe). But we can’t forget that, at the end of all this, the goal is to find the right person, fall in love, and build a kick-ass relationship that people will admire and look up to for generations to come.

Given all that, there is a bit of a hierarchy in Dating & Hookup. It can be tough to find a guy who you like enough to see as a Boyfriend Prospect. So when you do? You need to really explore that. More than you need to secure a +1 for that awkward couple-filled dinner party. Boyfriend Prospect trumps Accessory. And it trumps Ego Booster, too. Because you know how you text your Ego Booster when that guy who you really like blows you off? Well, it sounds like your friend really likes your Ego Booster/Accessory. And he sounds like a good guy who deserves someone who really likes him. So give them a chance.

It comes down to who likes the guy more, once there are real emotions involved. I’m sure you can find another guy to sporadically grab lunch with, but can she just as easily find another guy with whom she might see a real future? The Boyfriend Prospect is typically the shining star – the priority – in Dating & Hookup (but man, does that Hot Sex Prospect seem important, too!). The overlapping should progress accordingly.

4) Focus on other guys in your dah.

That’s part of why you have them, right? So that you don’t needlessly put all your eggs into one basket? Especially into an Ego Booster/Accessory basket?

Don’t beat yourself up for feeling a little jealous. The whole point of Dating & Hookup is that even the lowliest, least present guy still matters and adds to your life and offers a potential connection. So of course losing an Ego Booster/Accessory is going to be disappointing.

But don’t overdramatize this. You don’t want to date him. Let him be with someone who maybe does! And in the meantime, refocus your energies on other dah members. Maybe your Career Booster will surprise you by being a great party date, or your Hot Sex Prospect will show some smarts that you didn’t know he had, or your Ex-Boyfriend Who’s Still Around will be willing to provide some ego stroking and tell you all the things he liked about you. Or you could meet a guy tomorrow who fills one of these roles, or the next day, or the next day. Your goal isn’t to collect all 10 dah members like Burger King figurines and then hoard them away forever. It’s to explore and challenge and learn about yourself.

Maybe you lose one dah member. So what? Go out and find another one. A new experience and connection will do you good.

WTF?! BOTTOM LINE: Your dah will definitely overlap with your friends’ dahs. It’s a post-dating fact of life. When it happens, don’t be overly dramatic or passive-agressive. Just start talking openly and honestly once one of you catches feelings. And then? The girl with the strongest feelings – or the most evidence that the feelings are mutual – gets to explore them. It may feel weird, but swallow your pride, give them your blessing, and go hang out with some other new or neglected dah members.

Oh, and 5) Stop worrying about it.

They may fall in love and live happily ever after. Or, they may crash and burn after two weeks. Who knows? You can’t predict the course of their flirtation, so let them do their thing, consider it a learning experience, shower them with lots of encouragement and positive energy (if necessary, fake it ’til you make it), and then move on to thinking about other stuff.

You might get your Ego Booster/Accessory back in no time. On the flip side, you may find yourself with a new Unavailable Guy. Don’t assume that a few dates and make-out sessions are necessarily the be-all end-all! In the absence of a crystal ball, just chill out and see what happens.