Adam from Girls: Friend or Foe? 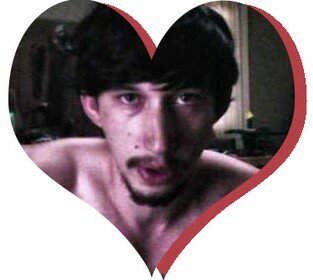 Nothing creepy about this guerrilla/gorilla love animal, right?

If you’re following Girls, chances are that Hannah’s now-ex-boyfriend, Adam Sackler, has won you over. And if you’re caught up, you know that in this season’s second episode, “I Get Ideas,” he emailed her an entire album of breakup songs and let himself into her apartment with a spare key, even though she had said in the previous episode that she never wanted to talk to him again.

Grace Devoll, who writes the Girls recaps for this site, has a great, measured approach to the wacky goings on in the show, and a keen eye for detail. Over at Vulture, however, they’re a little more swayed by the Adam Sackler method. And it’s bringing up an interesting question: what is the line between romantic and stalker?

Here’s the salient part from the Vulture recap:

…he’s the closest thing to a hunky teenager we have on this show. Who else storms over to your apartment the minute his cast is off, scares the shit out of you, giggles adorably, and then demands and chugs a glass of milk? Or single-handedly brings back the mixtape, infused with the sincerity and genuine devastation we reserve for 14-year-olds who dye their hair black and swap vials of blood…Or stages his love-stricken position via heroic monologue: “As a man, living my man-life my desire for you cannot be repressed and to quit this pursuit would be to shirk self-respect and abandon my own manhood.” Swoon!

I have to admit, I liked Adam at this moment for his passion. But I also felt that he was dangerously close to being…dangerous. A commenter on that post, writing under DRAMABB82, got right to the point:

UhmWOA. Are you serious with that last paragraph??? A “goof” dancing around the table? Try “menacing.” “Giggles adorably” ? Try “derangedly.” “The minute his cast is off”? It was the MIDDLE OF THE NIGHT. “Not cool” that Hannah called the cops on him?!?! You’re serious? You’re SERIOUS? That whole scene was terrifying. Adam is a creep.

Swoon-worthy? Or deranged? I think it was intended to be borderline, and there’s a lot of context within the show that will inform how you feel about this particular scene.

But, ultimately, it’s not at all complicated. The difference between romantic and stalker is how you feel. If you feel your safety is being compromised, you are always within your rights to call for help, or do what you need to in order to get out of the situation. Nothing else matters at that point. It doesn’t matter that Hannah is being really bitchy this season, or that she’s inconsistent, or prone to drama, or even that she hung up on the 9-1-1 call. It doesn’t matter if Adam was really being deranged or if he had the purest intentions. All that matters in that Hannah feels threatened. She has every right to feel that way and every right to act on it.

We’ve been indoctrinated to think that persistent men are romantic. I recently, finally, saw The Notebook. I’d been meaning to see it for years and was primed to love it. Gosling! McAdams! Costuming! But I started to have doubts from the very beginning. Gosling sees McAdams at a county fair. He asks her to dance and she says no very firmly. When he asks why, she tells him, plainly, “Because I don’t want to.” So Gosling, naturally, jumps up onto the ferris wheel where she’s sitting with the guy she’s already on a date with, dangles from a bar, and threatens to let go if she doesn’t agree to go out with him.

We can say this is romantic, or epic. We can say “He knew they were meant to be together! How could he walk away!?” And I’m not here to knock love at first sight. But it seemed to me that when Gosling jumped up on that ferris wheel, all he was really doing was being a bully. He was saying that he didn’t care if the girl wasn’t interested, and he didn’t care that she said “no.” He wanted to date her, and his desire to date her was more important than her desire to be left alone. That’s not how I think true love should be. I can see risking your life to save the person you love as being romantic. But not risking your life just to get your way.

Oh yeah, then he tells her she’s uptight and makes her lie in the street.

Romance as we know it helps hold in place a power structure, where women — you guessed it! — have less power than men. Almie wrote about the double-standard of romance, pointing out that a girl holding up a boombox a la Lloyd Dobbler would not be seen as romantic, but as desperate — one of the many ways women are disempowered in the realm of romance. As long as the power imbalance remains in place, it will be difficult for women to make big sweeping gestures without also courting negative social implications. Men and boys will be able to impose their will and call it romance. There will always be a fine line between romantic and stalker.

I suspect most women understand this intrinsically. I think most women, when persistently pursued, have stirrings of misgivings mixed in with other feelings. I think a woman in the real world, bullied into going on a date, might resent the imposition on her time, if nothing else. But I worry that, as long as we’re told that The Notebook is the pinnacle of romance, we’ll have a harder time trusting our own instincts, or believing in our right to personal space and safety. It’s important to point out that The Notebook was based on a novel written by a man. The adaptation and screenplay were written by men, and it was directed by a man. The episode of Girls where Hannah calls 9-1-1 was written by two women.

Women can start to even out the power balance by taking a step back and being honest with ourselves — is the guy who keeps texting you being romantic? Or is he a bully? — then being honest with the men around us, and then getting the hell away if they don’t listen. Let’s not allow ourselves to be charmed by persistence — it doesn’t turn a bad guy into a good guy. Let’s believe in our own worth so strongly that we don’t mistake romantic gestures for comments on our value as people. And should it ever come down to it, let’s never be afraid to protect ourselves, or to call for help.

← Please, Tell Me About Your Ex
If We Break Up, I Want Nothing to Do with You →

To this day, we’re puzzled at how Kacy Black nevertheless hasn’t been drafted by a huge studio to perform as 1 of their models. deven hubbard only fans Obtaining out and seeing nature though also meeting new persons is a win-win. OnlyFans stands for inclusion and we will continue to give a household for all creators. my dad taught me everything Most chat line callers are calling so that they can sooner or later hang out in individual.