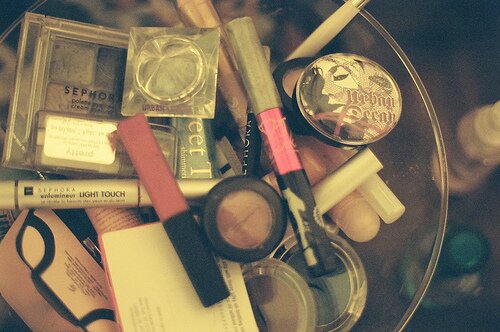 I read an article on Psychology Today‘s website that said women are more likely to buy lipstick in times of economic recession because they want to “attract mates ‘with resources.’” This annoyed me, but not because the results of the study implied that a woman’s thoughts are as simple as, “I need pretty lips in order to snag a man!” Women are obviously more complex than that; even with scientific research and results, we all know there are many other motivators at work in a person’s search for love. No, the bigger thing that bothered me is that although I’d like to meet a nice guy, I don’t want to bother with lipstick. Makeup is already difficult enough as it is.

Admittedly, I’m a bit jealous that dudes haven’t had to figure out the makeup game. Their low-maintenance look can be as quick as shaving their face and swiping on Chapstick (and clearly I’m referring to normal, everyday guys, as male celebrities are an entirely different story). A lady’s low-maintenance, no-makeup look usually involves at least four products. I think I’m actually aiming low with that four products guess, but again, I’ve never been great at the art of makeup.

I’ve worn makeup since sixth grade. It was simple at first; I was allowed to wear a little bit of foundation and mascara. Powder and eyeliner made their way into my makeup bag in junior high. Various eye shadows hit the scene in high school. I kept adding stuff but the routine never really changed. I never learned the difference between foundation and concealer — I thought they were the same thing — and powder went on top of that. I smudged my eyeliner every morning and swiped a touch of eye shadow over it. That’s it.

I read a ton of teen magazines and of course there were beauty tutorials and how-to guides and product recommendations, but I’d get confused and overwhelmed by all of the information. Ultimately, I just didn’t care enough to research everything. I didn’t think one concealer could really be all that different from another, or that one type of mascara could do something different to my lashes than some other brand. I wanted to look presentable, but I didn’t want to go crazy in the pursuit of the perfect blush.

So why did I even bother with makeup? Because once I started wearing it, the routine became normal. I have light-colored, super-short lashes that kinda disappear into my eyelids, and after a while I felt weirdly yet legitimately naked without at least one coat of mascara. Like any other young adult, I had zits and acne scars that I wanted to cover. And yes, I wanted to feel pretty and confident so that maybe a boy would think I seemed pretty and confident. And eventually a boy did, and he was sweet and complimented me all the time, but I don’t remember him ever saying, “Wow, I love what you did with your makeup!”

Makeup didn’t matter to guys then, it didn’t matter to the guys I met in college, and I haven’t met any who seem to care too much about it now. It seems silly, then, that women supposedly rush to buy lipstick in a recession in an attempt to attract male attention. I’m all for wearing makeup to feel pretty, to feel good about yourself, to feel good around other people. We all need confidence boosters, and if yours is found in the makeup aisle, then that’s totally cool. It’s fine and normal to want to look good for your own reasons. But doing something like that out of fear of loneliness doesn’t seem rational. It seems like poor financial planning.

Thanks, partie traumatic, for the image!

Images in specific can linger lengthy soon after you ve deleted them or closed your account due to lots of substantial internet websites hosting user uploaded photos with Content material Delivery Networks. centerfolds worcester As soon as you grow to be a member, you can use automated matches to schedule reside chat sessions and participate via texts. MillionaireMatch has been catering to wealthy and appealing singles for the previous 21 years. italian bachelorette When women do seek healthcare focus, healthcare experts typically fail to take a comprehensive health related history.

Communication in the network is so effectively and genius that has evolved from a trend into the each day life of nearly each human. dating sites for older - mature lady dating The roster of internet websites seemed intriguing I think. Very, all I would like to declare, is the fact the way I get pleasure from the likelihood that I ve obtained and place inside my plan on this web page. men are not mind readers All experienced ladies are divided into a number of categories according to ethnicity, on the web now, sexual preferences, body sort, age, and location.

Since starting in 1974 as a pen pal publication, CherryBlossoms. pittsburgh rubratings The London Olympics 2012 is coming to an end quickly but to continue the fun, Coffee Meets Bagel analyzed 68,000+ matches to uncover the connection involving adore & sports. As this is 2021, all of these solutions, even the decades old Match, present each iPhone apps and Android apps. how to tell when someone likes you Many of them appear nice, and particular daters are certainly wonderful.

A legit dating website will use payment processors like Epoch and SegPay. mary bellavita onlyfans —They might ask for also a great deal private info pretty early upon meeting them on the internet. It is significant, particularly on a critical dating web site, that you take the time to make your written presentation as excellent as it can be, and reveal your accurate self honestly and meticulously. ace young and diana degarmo It is quite uncomplicated to make a profile, and you will be in a position to find other folks who are searching for like.