Register | Login
Going to the Chapel 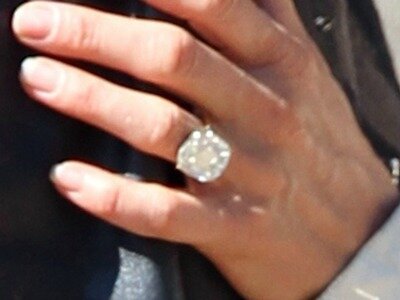 Actress and former failure at Life (according to the media because she didn’t have a man), Jennifer Aniston, finally showed off her flashy engagement ring to the world. You see, when she announced her engagement back in August e’erybody was like 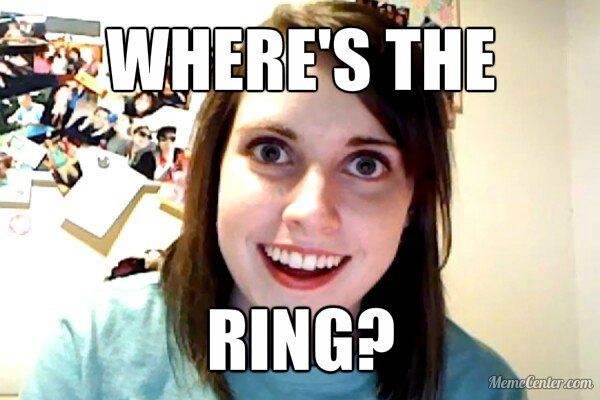 It was as though people were saying, “Yeah, yeah, you’re happy and shit, but we need proof that Justin loves your refurbished vagina. Show me that ring!” So Aniroux basically responded with, “S my D,” with this $1 million dollar, ten carat diamond ring. And now every single bitch I know is getting their Stuart Smalley on and talking non-stop about how hopeful they are about love and I’m just like,

Jennifer was in Friends and Marley & Me and she goes to the gym. You star in Bitches Don’t Give a Damn About My Boring Ass Status Updates and only wear yoga pants when it’s laundry day. Y’all don’t have the same life or the same opinion on 2-in-1 shampoo/conditioners (Jen and I want you stop using that shit!). Anyway, the point is that everyone is going gaga over this ring and I’m like, THEY’RE BLOOD DIAMONDS, YOU ASSHOLE! Okay, okay, I’m not saying to people, but for reals, engagement rings, especially ones with diamonds, are dumb as fuck. There, I finally said how I feel.

And that revelation might come as a shock to all my married/engaged girlfriends because when they showed me their engagement rings, I acted overjoyed like this:

But, really, on the inside, I’m felt the way I do when I’m drunk and trying to figure out how much I should tip my cab driver:

In short, I was confused. I didn’t understand why I’m supposed to care about such a material object. I didn’t understand why people would conclude that if a woman is not given an expensive engagement ring, then obviously, the man isn’t serious about marrying her. I didn’t understand why I should spend my free time looking up what kind of rings I like, dream about the diamond cut and setting as if the engagement ring is the END GOAL. Duh, it’s not. You have to marry that person who gave you that ring. Raise chillrens with that person. Live with that person. All day. E’ery day. For the rest of your life. I don’t care how flashy, pricey and pretty a ring is, it’s not going to make it better when you’re doing laundry and discover there are tread marks in your hubby’s underoos. A kiss from Kay will not make that better, but a bottle of Tide detergent that’s on sale for $8.97 at Walmart will. So really, what is the point of an engagement ring?

Originally, Egyptians believed that the ring finger contained a special vein that connected directly to the heart, so obvs, they wanted to put a ring on it as a symbol of deep love. CUTE! The Romans agreed with this sentiment, but got trifling with it because they believed the ring symbolized ownership as in dudes could “claim ownership” over their woman. Eww. Back in the day in Asia, shit got shady with “puzzle rings,” which were designed to be able to fall apart and put back together again, if you knew how to do that. Basically, when dudes went away on business, they made their wifeys wear them so that if the women decided to get their freak on with other men and took off the ring, those bitches would be busted. But it’s also like wouldn’t those wives just and keep the ring on while cheating especially since they know the purpose of the ring is to make sure they’re not playing the game “Pass Me That Peen?” I mean, if the fact that you’re married to someone else isn’t going to deflate your lady boner, then wearing an engagement ring while sexing on a random dude ain’t gonna mean shit. Now we arrive at Amerricur. In America, the engagement ring symbolizes the eternal love, happiness, and commitment and is still the way to symbolize the contract of impending marriage…

We all know what the engagement ring is about: making other bitches jealous. Don’t believe me? I was talking to a single girlfriend a mine a few months ago and she was talking about what kind of diamond engagement ring she would want and I told I didn’t see the point of them. After being quiet for a few seconds, she goes, “But how will people know your engaged?” To which I replied, “What people?” And she says, “You know, people.” Seriously, what people? Oh, you mean the strangers on the bus. I need this symbol of my impending marriage to let people I’ve never met know that someone lurves me while they have to dutch oven themselves in bed to feel warm at night. Like I said, the engagement ring is to show off and make bitches jealous. Newsflash: WE’RE ALL RIDING THE BUS/SUBWAY TO WORK, SO NO ONE IS BETTER THAN ANYBODY ELSE AND IT PROBABLY WOULD’VE BEEN WISER FOR MY FUTURE HUSBAND TO SPEND THAT MONEY ON A DOWN PAYMENT FOR A CAR SO THAT WE CAN GO TO COSTCO AND STOCK UP ON A MONTH’S WORTH OF TOILET PAPER INSTEAD OF GOING TO WALGREEN’S ONCE A WEEK AND GETTING THE FOUR PACK OF CHARMIN BECAUSE THAT’S ALL I CAN CARRY ON PUBLIC TRANSPORTATION WITHOUT PEOPLE THINKING I HAVE A SHITTING PROBLEM. #Priorities

Look, I get it. Weddings, marriages, and diamonds are engrained in women’s brains from the time they are young girls. We’re supposed to be princesses and wait/be on the hunt for the guy who is the prince charming and is willing to spend three months’ salary on diamonds that were gotten in exchange for some African’s arm cuz who needs arms? Oh, fucking e’erybody. #PrioritiesTheSequel. But moral issues aside because we all know about blood diamonds and either most people do not give one eff about the ugliness of the diamond industry or want to fool ourselves into thinking that the entire diamond industry has changed and now all diamond are conflict-free. Right. Keep fooling yourself like how I fool myself because even though I don’t eat meat anymore, I justify eating eggs because they’re “cage free.” It’s like, “Pheebs, you just like and want eggs in belly. End of fucking story.” So like I said, let’s put morals aside for the time being and focus on the fact it’s insanity that men and women are taught that the best way to show you love is through an engagement ring. Not only is it insane, but I think it really is a distraction.

I mean, the divorce rate is crazy high in this country. 50%. It’s good that the other 50% are working, however; it’s clear that a lot of people are getting caught in the material aspects – the big ring, the fancy wedding, etc. – and not looking at the things that really matter in a relationship. I seriously wonder if some women would marry the men who proposed to them, promised to love them forever and then high-fived them and said, “Let’s go to Applebee’s.” I wonder if there wouldn’t be a tinge of disappointment that there isn’t a ring. Some doubt as to whether or not the guy loved you. And there shouldn’t be doubt. We see celebs’ marriages fall apart all the time despite all the extravagance. Rings aren’t a symbol of love nor a fix-all for bad behavior. But they’re viewed that way. Brad Pitt gave Angelina Jolie a fancy diamond ring after years of living and raising chillrens together and it wasn’t until that happened that some people acted like their relationship was really legitimate. Or take the the case of Kobe & soon-to-be-ex-wifeVanessa Bryant. A few years ago, she stood by his side because he bought her “Maybe I raped that chick, maybe I didn’t. I’m sSowwie” diamond ring. I mean, how fucked up do you have to be, how obsessed do you have to be with material possessions that a diamond ring makes up for a “maybe rape?”

The point is that engagement rings, especially diamond ones, in my opinion, are pointless because they aren’t a measure of the level of devotion within a relationship. They don’t prove someone’s love because material things are not love. So it’s time to shift our priorities. Being there for your significant other when someone close to them dies, that’s love. Supporting your significant other as they try and pursue their dreams outside of their day job, that’s love. Being with the person even when they piss you off, you two don’t agree, because they understand you better than anyone else does and vice versa.

← “How To Find Your Man”: 10 Pieces of Dating Advice from 1954
ME AND THE EMPIRE STATE BUILDING AND ROMANCE →