Ask Jess #18: My Ego Booster Kissed Me – Can I Still Keep Him as an Ego Booster? 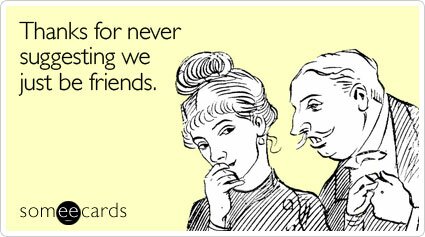 I recently moved to a new city and have been re-building my dah here. So far, so good!

Until last night, when one of the guys in my new dah kissed me. I had been thinking of him as an Ego Booster, and I didn’t really want to kiss him back. But in this weird way, I felt a responsibility to kiss him – like to not return the kiss and give a “let’s just be friends” speech would have been too much of a rejection, and would have made everything seem like too big of a deal. It was just a kiss, right? Not a marriage proposal!

So, we kissed – and then today, he sent me an email apologizing for any “awkwardness” (and for his garlic breath) and inviting me to a concert. Now that we’ve kissed, I know that this would clearly be a date.

How can I keep him as my Ego Booster for now, and transition out of this situation? I’m just not seeing him as a Boyfriend Prospect at the moment – but I also feel like I’m still beginning to get my bearings in this new city, so, who knows, further down the line…? He’s a cool guy, and I’d like to keep him in my dah, if possible.

First of all, let’s give your Ego Booster a big BRAVO for having the guts to go after you! This guy has balls and is clearly determined to break out of your friend zone. Unlike too many of the unnecessarily insecure men of his generation (who we of course love nonetheless), he isn’t scaring himself off by the possibility of rejection, or even by his own questionable garlic breath. He is trying to cut the ambiguity out of your relationship, because he knows that he likes you – and for that, he gets some WTF?! props.

But unfortunately for him, this is the post-dating world…and sometimes, we like a bit of ambiguity in our connections. So how can you infuse some ambiguity back into your dynamic, thereby taking the pressure off and buying some more time to further explore your feelings? Without being a jerk and stringing him along for the sake of your ego, of course?

Option #1: Maybe you can’t. If you are 100% not interested in him romantically, and are sure that you never, ever will be, then you need to be immediately upfront and clear with him about that (although please, be nice!). Respond to his invitation and say that you apologize for letting the kiss happen and for potentially leading him on, because although he’s so, so, so great, you just don’t see the two of you being anything more than friends. And oh yeah, no, you can’t make that concert.

You might feel like you’re being a little dramatic and presumptuous, given that he’s not asking you to be his girlfriend or mother his children, but that’s okay – in this scenario, better safe than sorry.

Once you pull that band-aid off for him, you’ll probably have to accept that he might not want to be in your dah, in any capacity, anymore. But you sound like a strong girl! Your ego can survive without an Ego Booster for a little while. So set him free. Although if you’re determined to leave a little ambiguity there, then there’s always…

Option #2: Clearly reject him with your actions for now, but hold off on saying anything final until you’re more sure of what you want. Turn down his invitation to the concert, but do it in a way that doesn’t reject him as a person. Tell him that you’re still getting your bearings and can’t really commit to plans right now. And then, for a decent amount of time – weeks, or maybe even months, if he seems like someone who might take a while to get the hint – be careful to not act in any way that might lead him on.

For now, don’t accept his one-on-one invitations to hang out. Don’t exchange regular, fun, flirty getting-to-know-you emails (when in doubt, just stop responding). If you see him in a group setting, be nice, but don’t give him any extra attention. Don’t ‘like’ his Facebook statuses. Don’t initiate text conversations. And for god’s sake, don’t kiss him again.

Do this until you are absolutely certain that he’s gotten the point, and is aware that you are not interested in him as a Boyfriend Prospect (right now). Most self-respecting guys will pick up on these neutral signals without needing to be slammed over the head with outright rejection. But here’s the key: he will only pick up on your neutral signals if you don’t send any positive ones his way as well. He likes you, and is hoping that your actions will prove his interest to be mutual – so if you give him an inch right now, then he’ll take a mile!

Every time he picks up on a positive signal from you, you’ll both end up back at Square One. So for now, be polite and friendly to him, but that’s it. Once he gets the hint and moves on, then you’ve got a better chance of restoring your friendship and maybe even settling into a groove with him as your Ego Booster.

Does this advice sound evil? Does it sound like I’m telling you to string this guy along? I’m not. If your Ego Booster had been a longtime friend of yours, and had declared some serious feelings, then it would be a different story. But it sounds like you barely know this guy – and, I’d like to have some faith in him and assume that he can handle a rejected concert invitation from a fairly new girl in his life without bawling his eyes out in front of the latest episode of Downton Abbey.

So don’t worry, you’re not being evil by trying to leave that door open a crack. Anyway, he’ll be the one who finally gets to decide whether he wants to have you in his life in this more ambiguous, dah-centric way. The ball is still in his court – you’re just letting him know that the court looks a little different than he was initially expecting…

WTF?! BOTTOM LINE: If you want to leave the door slightly open with this guy, then avoid any big, explicit rejections or “talks” and instead turn him down more ambiguously – but still turn him down! Be clear in your platonic intentions and actions for a while by not being proactive in any way in your friendship. Don’t give him any “ins” to pursue more than a friendship. Rinse and repeat until you’re sure that he’s moved on, at which point you can loosen the restraints a bit.

And now, a quick note to any guys who are navigating the tricky Ego Booster terrain in some girl’s dah: don’t let this story scare you! If you decide, once and for all, that you want to transition out of the Ego Booster category into Boyfriend Prospect or Hot Sex Prospect territory, then making a confident, sexy, manly move is still the ONLY way to do it.

I’ve heard the stories, done the interviews (more on that in my BOOK!), and watched, over and over, as Ego Booster has won the girl. I promise, it can be done. But you won’t leap out of the friend zone by being funny or nice, or by patiently waiting twelve years for that moment when she’ll wake up and realize that you’re the one for her. Nope. You’ve just got to make a move. Sometimes it will result in rejection. But sometimes it will result in you getting what you want. And isn’t that risk always worth it?

Update: We all want to know how this movie ends, right? Here’s the latest from NGWNGP:

“I ended up sending him an email that basically said, ‘Good hanging out, but can’t commit to much because I’m getting my shit together in this new city.’ And he wrote back, ‘Cool, no pressure – let me know when you want to hang out.’ So Dating & Hookup works!

And just so you know, I think he did the right thing in kissing me. Because that’s what he wanted to do – and for better or worse, a kiss raises the stakes. Otherwise, I could have pretended that the concert invitation wasn’t really a date, and jerked him even around more.”

Well then! To be continued…

← Oh, That Girl? I Just Paid Her to Help Me Hit on You
Sending Love & Good Wishes to Gabrielle Giffords →